General Mile Novakovic, former commander of the Serbian Army of Krajina, is testifying at the trial of General Perisic. Today he ‘allowed it may be true’ that in the first half of 1993 he turned to the VJ – and ‘most likely to the VRS, too’ for the Orkan rockets his army needed. Two years later, the Krajina Serb army used those rockets to attack Zagreb 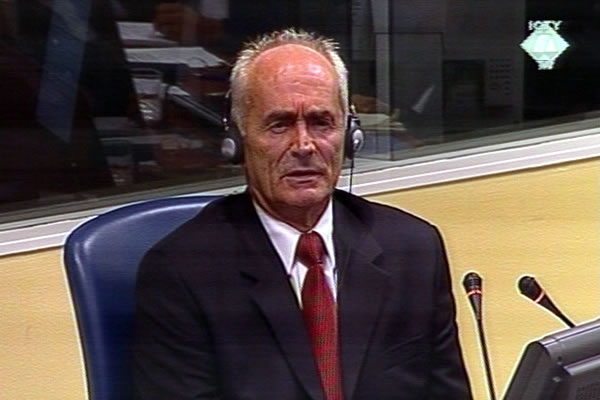 Mile Novakovic, defence witness of Momcilo Perisic
Continuing his cross-examination of the former SVK (Serbian Army of Krajina) commander Mile Novakovic, the prosecutor showed him a note Ratko Mladic made at a meeting between Slobodan Milosevic and the representatives of the political and military leadership of the FRY, RS and RSK on 8 November 1993. At the meeting, Milosevic ordered that a joint war plan be drafted. Some days later, the plan was put together and named the Drina plan. It envisaged ‘unified use of the armed forces of the Serb people’ if Croatia attacked the Republic of Serbian Krajina.

In his examination-in chief, Novakovic claimed that the SVK didn’t receive any fuel from the VJ because ‘the VJ didn’t have enough fuel for its own use’. The prosecution showed Novakovic an entry from Mladic’s diary, where Milosevic is recorded as saying that the ‘army should be a priority and the SVK should get 1,000 tons of fuel’. Novakovic confirmed that the fuel was delivered to the SVK. However, he went on to say, crude oil extracted in the village of Djeletovci in Eastern Slavonia was turned into fuel in the oil refinery in Pancevo and then the fuel was delivered to the Krajina army.

The prosecutor went on to show the witness another entry from Mladic’s diary dated 21 October 1993, where Mladic writes that Milosevic ‘ordered’ that two VRS units be attached to the SVK Lika Corps. Novakovic argued that Milosevic didn’t order anything but ‘merely made a suggestion’.

General Perisic is on trial because, as the prosecution alleges, he seconded officers to the SVK and thus contributed to the rocket attacks on Zagreb by the Krajina Serbs on 2 and 3 May 1995. The SVK fired rockets from an Orkan multiple rocket launcher system. When the prosecutor showed Novakovic a document from the first half of 1993 in which Novakovic asks the VJ General Staff to provide rockets for the Orkan, Novakovic allowed ‘it may be true’ that he turned to the VJ ‘and most likely to the VRS, too’ for materiel. Novakovic says the attack on Zagreb was ‘morally and politically unacceptable because the Orkan system was used indiscriminately, rather than for targets’.