Prosecution witness, former UNPROFOR officer who served in BH, denied the claim that the blue helmets ‘tolerated the BH Army attacks’ on Serb positions and responded to VRS actions with ‘ultimatums and punishment’ 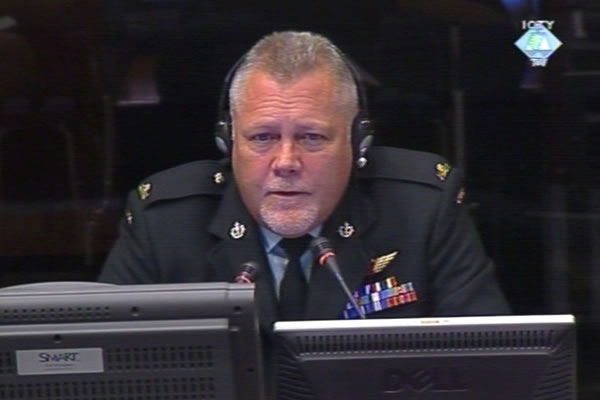 Louis Fortin, witness at the Zdravko Tolimir trial
The accused Zdravko Tolimir continues his cross-examination of Canadian officer Louis Fortin. In the summer of 1995, Fortin served as assistant to French general Gobillard, commander of the UN forces in the Sarajevo Sector. Tolimir tried to corroborate two arguments: that UNPROFOR in Srebrenica and Zepa was ‘favoring Muslims’ and that the VRS attack launched in the summer of 1995 was an inevitable consequence of the way in which the Muslims exploited the existence of the enclaves under the UN protection.

UNPROFOR tolerated the attacks the BH Army launched from the UN-protected areas although those areas should have been demilitarized according to the agreement, the accused suggested. Furthermore, as Tolimir said, UNPROFOR did the same thing in Sarajevo, where the UN sector had its headquarters. Fortin himself served there. UNPROFOR tolerated the attacks by the BH Army from the city on the VRS positions around Sarajevo. At the same time, UNPROFOR would ‘punish’ the Bosnian Serb army with air strikes for its response when it failed to withdraw its heavy artillery.

The Canadian general dismissed Tolimir’s claims about the UN’s partiality, explaining that UNPROFOR protested whenever there was a violation of the agreement on the protected areas. This included the BH Army attacks on the VRS positions. ‘The Muslims didn’t make it any easier for the UNPROFOR’, the witness explained, noting that those attacks were preceded by an extended and exhausting blockade of the enclaves by the Bosnian Serbs. The people inside were forced to desperately seek ways to find food.

The witness also denied the claim that UNPROFOR’s ‘task was to prevent the attacks by the Bosnian Serb troops’, as the accused suggested. The UN had a mandate to protect the enclaves, make sure supplies reached them and supervise the implementation of the agreement on protected zones.