Completing his evidence at the trial of Zdravko Tolimir, former UNPROFOR chief of staff in BH, General Nicolai testified he was never told that the BH Army restricted the movement of UN troops in Srebrenica in the ‘Bandera Triangle’ inside the enclave in the summer of 1995 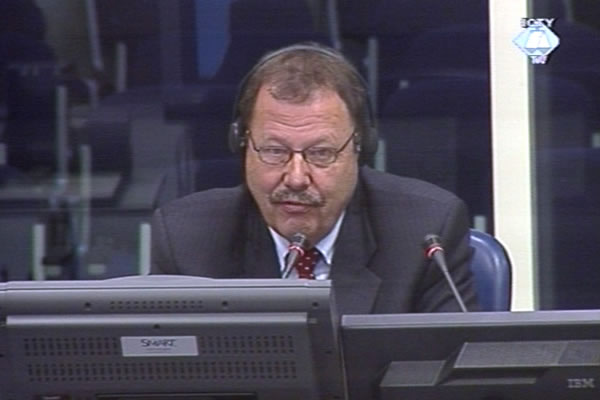 Cornelis Nicolai, witness at the Zdravko Tolimir trial
Dutch general Cornelis Nicolai, who served as chief of staff of UNPROFOR in BH, completed his evidence today. In his cross-examination, the accused Zdravko Tolimir again contested the claim that the ‘blue helmets’ in Srebrenica enjoyed full freedom of movement. The BH Army restricted their movement in the enclave formally protected by the UN, Tolimir contended, showing the Dutch general the evidence of Major Robert Franken, who was deputy commander of UNPROFOR Dutch Battalion in the summer of 1995.

In his evidence, Franken said that the Dutch soldiers were denied access to one part of the enclave, known as the ‘Bandera Triangle’; he showed the court where this area was on the map of the enclave. Today Tolimir showed this map to General Nicolai, who nevertheless maintained he had received no reports to that effect. As far as Nicolai knew, UNPROFOR’s movement within the enclave was never restricted. ‘This still surprises me’, Nicolai said.

General Tolimir, Mladic’s assistant commander for security in the VRS Main Staff, brought up a series of documents to show that the BH Army violated the agreement on the demilitarization of Srebrenica and Zepa after the establishment of the ‘protected areas’ in March 1993. Nicolai agreed that Srebrenica was never completely demilitarized. On the other hand, Nicolai rejected Tolimir’s suggestion that UNPROFOR tolerated the illegal efforts to supply arms to the BH Army in the enclave. Nicolai reminded the court that the no-fly zone was established precisely to limit those activities. The no-fly zone significantly reduced the number of helicopters overflights, used to supply weapons, but it was impossible to put a stop to those activities because of the rugged terrain.

In the final part of his cross-examination of the Dutch general, Tolimir focused on the claim that UNPROFOR was biased, favoring the Muslim side. Tolimir put it to Nicolai that three days after the VRS attacked the enclave, UNPROFOR ‘was working on securing political preconditions for NATO air support” although the situation in the field didn’t call for that. Nicolai dismissed the suggestion, saying that on 9 July 1995 he relayed to the Dutch Battalion General Janvier’s order to take positions in the eastern part of the Srebrenica enclave. This meant that the Bosnian Serbs would have to attack the UN troops if they wanted to continue their onslaught on the enclave.

As Nicolai explained, this was the French general’s response to the Dutch demands for air support. Janvier believed that air support could not be approved unless there was a direct engagement between the Serb forces and the UN and unless civilians came under attack. If the VRS were to attack the blue helmets, the UN troops could return fire and call in NATO air support.

The accused finally asked the Dutch general to comment on the evidence of Canadian officer Louis Fortin. The assistant commander in the UN Sarajevo Sector claimed that ‘UNPROFOR would punish only the Serbs because they considered the Serbs to be the aggressors in the war’. Nicolai tersely said he found the remark to be ‘total nonsense’.