ONE BODY IN FOUR GRAVES

According to the latest OTP report, a total of 6,557 victims were identified after the investigation in Srebrenica and Zepa that lasted for years. OTP investigator Dusan Janc gave evidence about this effort at the trial of Zdravko Tolimir 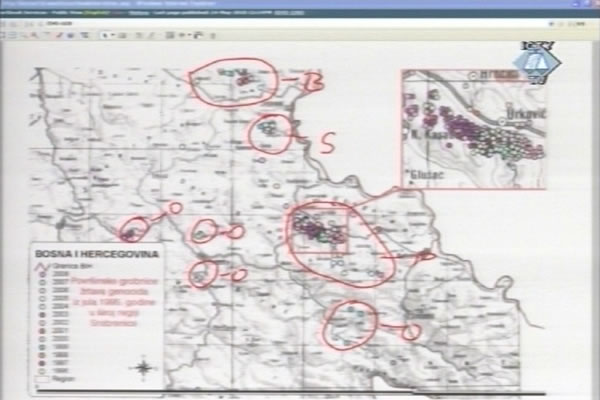 Map marking all the graves identified in the Srebrenica area and one grave containing victims of a crime in Zepa
According to the latest report on the results of the OTP investigation, the number of identified Srebrenica victims has reached 6,557. There are still about 1,300 names on the list of the International Commission for Missing Persons whose remains have neither been recovered nor identified.

At the trial of former security officer in the VRS Main Staff, the court heard testimony of Dusan Janc, OTP investigator who authored the report. Zdravko Tolimir is on trial for genocide and other crimes in Srebrenica and Zepa in the summer of 1995.

Janc joined the OTP Srebrenica investigation team in 2003 and has since drafted four reports. The latest report containing information on the newly discovered graves and exhumations was completed in April 2010. The purpose of the report was to give the Trial Chamber an accurate number of victims from Srebrenica, the number of graves where their remains were exhumed and other forensic evidence establishing connection between the findings and the events described in the indictment.

In the process of establishing this connection, Janc explained, the starting point in most of the cases was direct testimony of the witnesses or survivors of mass executions listed in the indictment. The team of investigators, forensic experts, archeologists and anthropologists was then able to locate the mass grave sites and recover items which helped the team reconstruct the Srebrenica crimes.

Janc drew a map marking all the graves identified in the Srebrenica area and one grave containing victims of a crime in Zepa. A special chart showed the link between primary and secondary graves and links between several secondary graves.

Links between primary and secondary graves were reconstructed using forensic evidence such as soil, pollen or broken glass, which helped establish the connection between the primary grave at the glass factory tip in Kozluk and the secondary grave in Cancari. DNA analysis of remains helped establish the identity of the victims. However, body parts belonging to a single victim were found in two, three, and in one case in four mass graves.

Apart from the evidence recovered from graves, the team gathered so-called surface remains, mostly along the way where the column of soldiers and civilians was moving in an attempt to break through towards Tuzla. Of a total of 960 victims whose remains were gathered on the surface, 703 victims were identified, Janc said.

The Srebrenica investigation is still underway, Janc said, noting that the number of victims will certainly increase in future as new graves are discovered and recently exhumed remains are identified.

The accused Tolimir has asked for six hours to cross-examine Janc. Tolimir will begin his cross-examination on Monday.