SURVIVOR FROM WAREHOUSE IN KRAVICA

A resident of a village near Srebrenica gives evidence at the trial of General Tolimir. On 13 July 1995, the witness survived the massacre in a warehouse in the village of Kravica. About 1,200 captured Bosniaks were killed with automatic weapons and hand grenades there. General Tolimir is charged with genocide and other crimes in Srebrenica and Zepa 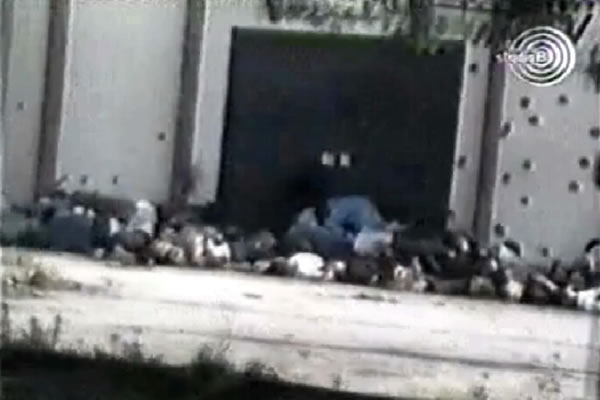 The footage made in front of the Kravica wearhouse shows about twenty bodies piled up
At the trial of General Zdravko Tolimir, the prosecution today briefly interrupted the part of its case focusing on the intercepted conversations between Bosnian Serb political and military leaders during the operation in Srebrenica, and called to the witness stand yet another survivor of the Srebrenica execution sites.

Protected witness testifying under the pseudonym PW 005 survived the massacre of over 1,000 Bosniaks in a co-op warehouse in the village of Kravica on 13 July 1995. Giving evidence with protective measures, the witness confirmed that what he said in his evidence on 8 February 2007 at the trial of seven Bosnian Serb officers was true. The transcript was then admitted into evidence.

The summary of the witness’s statement read by the prosecutor says that the witness left Srebrenica in the evening of 11 July 1995 on the orders of the command of the BH Army 28th Division. The witness separated from his family: they went to Potocari while he joined the column heading through the woods towards Tuzla. The witness survived two Serb ambushes when so many people were killed that ‘you could walk on dead bodies’, as he said. After that, he decided to surrender.

The witness estimated that almost 2,000 prisoners had gathered in a field near the village of Sandici on 13 July 1995. General Ratko Mladic spoke to the prisoners assuring them that they would be transferred to the BH Army-controlled territory and united with their families. Instead, the prisoners were taken to a co-op warehouse in the village of Kravica and executed. The executioners fired their automatic weapons and threw hand grenades in through the windows. The witness survived the execution and was able to escape from the warehouse. After two months of wandering, the witness managed to reach the territory controlled by the BH Army on 18 September 1995.

Zdravko Tolimir - who represents himself – confronted the witness in his cross-examination not only with the statement PW005 gave in 2007 but also with what he told the BH authorities in 1995 and the Tribunal’s investigators in 1996. The accused asked the witness to explain how he reached the figure of 500 men killed in the ambushes and the figure of 2,000 prisoners who were in the field at Sandici and later executed in Kravica.

The witness was adamant that he ‘never mentioned' the figure of 500 men killed in an ambush near the village of Kamenica - not even in the statements he signed where the figure appears. ‘I said that one could walk on the dead bodies but I didn’t count them’, the witness explained.