The accused Zdravko Tolimir showed clips from feature film Resolution 819 to contradict the documentary footage from Srebrenica and aerial photos tendered into evidence by the prosecution, as his cross-examination of Jean-Rene Ruez, head of the Srebrenica investigation team, continued. Tolimir claims that the ‘fabricated scenes’ shown there do not reflect ‘the real scenes’ from Srebrenica 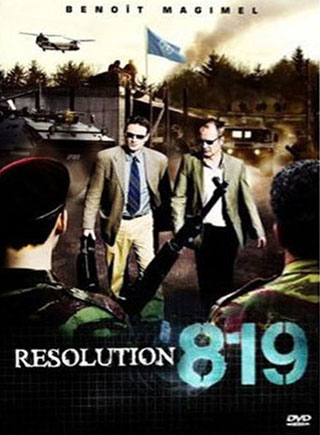 "Rezolucija 819" film poster
The cross-examination of Jean-Rene Ruez, head of the OTP’s Srebrenica investigation team today focused on the visual media. The accused Zdravko Tolimir, on trial for genocide and other crimes in Srebrenica and Zepa in 1995, asked a number of questions about the aerial photos of the Srebrenica area in the summer of 1995 provided to the prosecution by the US administration. He then asked Ruez if he could use his ‘connections with the Americans’ to help the defense obtain aerial photos Tolimir wants to see.

Tolimir, as he went on to explain, is interested in the aerial photos showing the column of about 15,000 soldiers and civilians gathering up and setting off towards the BH Army-controlled territory, through the woods and across the mountains. The accused believes that the photos would show that a large number of soldiers in the column were killed in the ambushes set by the Serb forces or in attempts to break through the Serb lines, rather than in organized mass executions, as the prosecution alleges.

The Americans were never asked to provide aerial photos ‘that pertain to the military history of the fall of the enclave’, the fighting between the Serb forces and the BH Army 28th Division, Ruez replied. He left that to ‘history’, focusing in his investigation on the fate of the thousands of the Srebrenica men who were captured or surrendered to Mladic’s forces. The aerial photos obtained from the US administration confirmed the testimony of the surviving witnesses and played an important part in the effort to find the mass graves in hidden and inaccessible locations.

Tolimir did move on to another topic, but still in the sphere of visual media. He showed the witness some clips and stills from the feature film Resolution 819 by Italian director Giacomo Batiatto. The film, Tolimir said, purports to be ‘based on actual events’ in Srebrenica, and draws on the experiences of the head of the Srebrenica investigation, named Kalvez, rather than Ruez, in the film.

The accused asked the witness to confirm it, and Ruez complied, stressing that he had played no part in the writing of the script or the making of the film. After a series of questions about the way in which the Srebrenica operation and General Ratko Mladic were depicted in the film, Ruez noted he was a police inspector and not a film critic and said it was a feature film, not a documentary reconstructing the events in Srebrenica. For his part, he had nothing to do with the film, either the concept or the finished product.

Finally, Tolimir again invoked the purported statement made by Mirsad Tokaca about ‘500 persons from Srebrenica registered as missing, who are still alive’. Prosecutor Peter McCloskey intervened, showing the judges a disclaimer from the Investigation and Documentation Centre to the effect that Tokaca’s statement ‘has been taken out of context’: it had nothing to do with Srebrenica but with his long effort to determine the ‘human losses’ in BH. In the years of research, he was able to determine that about 500 people listed on various lists of missing persons were in the meantime shown to be alive.

General Tolimir, who served as Mladic’s assistant for security and intelligence, is on trial for genocide and other crimes in Srebrenica and Zepa; the trial is slated to continue on Thursday, 13 May.