ULTIMATUM AS RESPONSE TO ULTIMATUM

At the trial of General Zdravko Tolimir, Dutch colonel Robert Franken described how he exchanged ultimatums with the commander of the VRS Main Staff on 10 July 1995. Mladic demanded that the Dutch Battalion, the BH Army and civilians leave Srebrenica. Franken responded by demanding that the VRS withdraw; if they refused, air strikes would follow 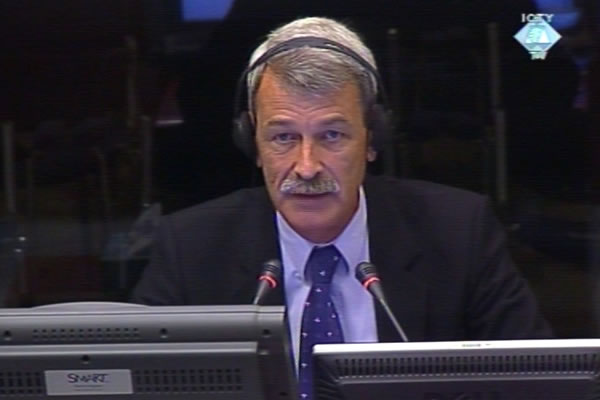 Robert Franken, witness at the Zdravko Tolimir trial
Former deputy commander of the UNPROFOR Dutch Battalion in Srebrenica Robert Franken is testifying at the trial of General Zdravko Tolimir. This is the fifth time Franken testifies before the Tribunal, describing the events of July 1995.

The prosecutor first read out the summary of Franken’s testimony at the Srebrenica Seven trial in October 2006. At the trial of the seven Bosnian Serb military and police officers, Franken said that the Serb forces intensified their attacks on the Dutch Battalion positions and the shelling of the Srebrenica enclave as early as in April 1995. The Serb forces harshly restricted the passage of convoys carrying food and medication of the population in the protected zone and fuel, ammunition and military equipment for the Dutch Battalion. Today Franken described those restrictions as ‘convoy terrorism’, noting that the strength of the Dutch Battalion dropped from 300 to 147 because replacements could not be brought in.

The VRS launched its attack on the Srebrenica enclave on 6 July 1995. On 10 July 1995, Mladic’s troops ‘randomly’ shelled Srebrenica. Direct fire was opened on the UN observation posts and on the base in Potocari. General Mladic gave an ultimatum to the BH Army, the Dutch Battalion, the UNHCR and civilians to ‘leave the territory’ by 6am on 11 July 1995. Colonel Franken responded by issuing his own ultimatum in turn, demanding that the VRS withdraw to the so-called Morillon’s line; if they refused, air strikes would follow.

The BH Army ‘disappeared from Srebrenica’ on 11 July 1995, Franken said; at the same time, Mladic’s troops took over several UN observation posts. The captured Dutch soldiers were transferred to Bratunac. The civilian population started fleeing en mass towards Potocari. Although the ‘blue helmets’ escorted the refugees, the column was under constant mortar fire. As Franken said today, 114 persons were wounded. In order to protect them, the Dutch moved the refugees to the rear of their base in Potocari. The air strikes finally began in the afternoon, but it was already too late. Mladic threatened to shell the base in Potocari and ‘kill the UN personnel’ in Bratunac. As Franken said, he took the threat seriously because ‘Serbs had used the artillery indiscriminately before’ targeting refugees fleeing from Srebrenica towards Potocari.

The Dutch colonel then described how men were separated from the rest of the people in Potocari and detained in the ‘white house’. The witness also spoke about the evacuation of women and children. The Dutch Battalion troops tried to escort the refugee convoys, but after they sent off two buses, the VRS soldiers prevented them from doing that. Colonel Franken was thus deprived of ‘the capability to see and hear what was going on’. Franken also recounted how on 17 July 1995 he signed the Srebrenica declaration together with the Bosniak representative Nesib Mandzic, stating that the ‘evacuation proceeded without any incidents in full compliance of the Geneva Conventions and international humanitarian law’. Although Franken thought the declaration was ‘pointless because the population could not opt to stay’, he signed the document to facilitate the evacuation of the injured, Franken said.

The accused General Tolimir began his cross-examination of Colonel Franken by establishing the strength of the BH Army’s 28th Division and defining the borders of the enclave which was under ostensible UN protection. The cross-examination continues tomorrow.