A signalman from the VRS Drina Corps is testifying in the defense of the former chief of the VJ General Staff. He contends that after Mladic’s attack on Gorazde in April 1994 he got Momcilo Perisic’s message in which he ‘kindly asked’ Mladic to ‘stop any further actions of the VRS’ 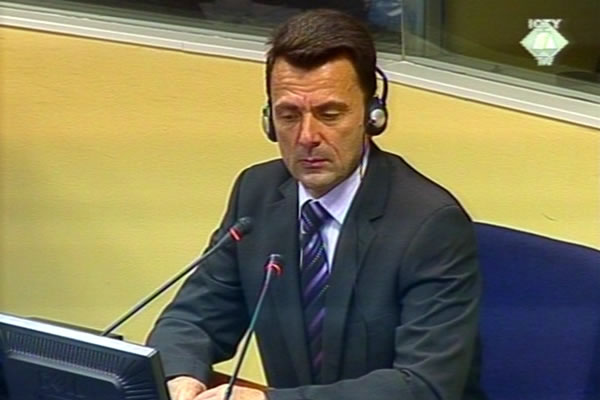 Milenko Jevdjevic, defence witness of Momcilo Perisic
With the evidence of Milenko Jevdjevic, commander of the signals battalion in the VRS Drina Corps, the defense of the former chief of the VJ General Staff Momcilo Perisic is trying to prove that the FRY’s military and political leadership didn’t have any influence on the Bosnian Serb army and General Ratko Mladic.

To confirm this, Jevdjevic brought up three messages sent to General Mladic in the spring of 1994. As a signalman, Jevdjevic received the messages at the forward command post in Rogatica. According to him, at the time the VRS was conducting an ‘offensive operation’ in the Gorazde area. After two weeks of fighting, the VRS reached the outskirts of the town.

Jevdjevic then received a phone call from the VRS Main Staff for General Mladic. As Mladic didn’t have any communications equipment with him on the frontline, the witness was supposed to convey to him an ‘important communication related to the political pressure from the FRY’, calling for an end to the operation and for the VRS to be prevented from entering Gorazde.

Half an hour after the call from the Main Staff, the witness received two other calls for General Mladic: first from the office of the president Slobodan Milosevic, and the second from General Perisic, from the VJ General Staff. Jevdjevic explained to everybody that he was aware of the urgency of the situation; he also said he had not been able to get in touch with Mladic who was on the frontline. The witness claimed Perisic told him to inform Mladic that he personally ‘was under a lot of pressure from the Yugoslav political leadership’ and was ‘kindly asking’ Mladic to ‘stop further action’ in Gorazde. The messages were not delivered to Mladic until the evening of that day, when the commander returned to the forward command post, Jevdjevic said. Mladic ordered Jevdjevic to say he couldn’t find Mladic next time when there were phone calls for him.

The defense was previously trying to prove that the communications equipment in the VRS was not provided by the VJ. Perisic is charged with providing, in his capacity as the chief of the VJ General Staff, logistic and other support to the VRS and thus contributing to the crimes in Sarajevo and Srebrenica. According to the witness, the VRS was ‘in great trouble’ because it had to establish its own communications system using scarce and poor equipment. The Drina Corps bought the equipment ‘on the market’ with a help of local town businessmen; they bought Motorolas and field telephone cables, and donated their switchboards that the army would then use for its needs. The witness said that apart from the local businessmen, the Drina Corps got ‘insignificant quantities of equipment from the VRS Main Staff’. Jevdjevic claims that he knew nothing about any meshing of the VRS and VJ communications systems.

As the examination drew to a close today, the defense counsel asked the witness if he ever heard or seen the Drina Plan. The witness denied it; the plan purportedly envisages joint operations of the VRS, SVK and the VJ. The prosecution will cross-examine Jevdjevic tomorrow.