Former counter-intelligence officer in the JNA and VJ is giving evidence at the trial of General Momcilo Perisic. He contends that he learned about the crimes in Srebrenica ‘from the media’ in early August 1995. Judge Picard found it ‘hard to believe’. The judge pointed that half of the VRS officers came from the VJ, that they were paid by the VJ, yet they purportedly never reported to it 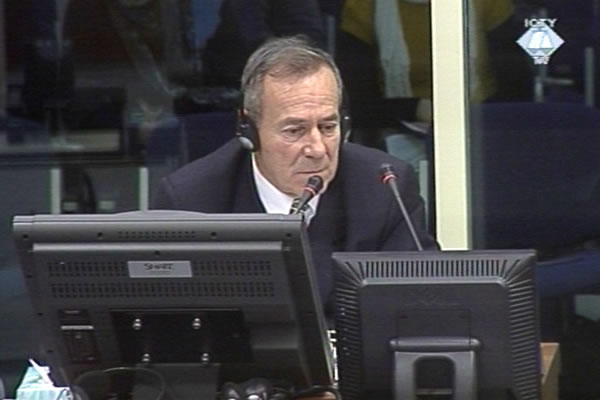 Branko Gajic, defence witness of Momcilo Perisic
Replying to General Momcilo Perisic’s defense, witness Branko Gajic said he never received any official reports from the intelligence bodies on the crimes in Srebrenica in July 1995. At the time, Gajic was in charge of the counter-intelligence department in the VJ Security Administration.

In the cross-examination Gajic added that he didn’t get any official reports from any other bodies in the VJ or from anybody in the FRY. Gajic said he only had ‘unofficial information’: what he gleaned from media reports in early August 1995. The information was ‘contradictory and unverified’. As Gajic said, ‘it was hard for me to believe it and assess what it was about’.

Gajic said he ‘didn’t do anything’ with the reports purporting that the Serb forces had killed a large number of Muslims in the Srebrenica area. It ‘was not a counter-intelligence issue’ but a matter for ‘an intelligence enquiry and for judicial bodies’ in the VRS, Gajic noted.

Judge Picard revisited the issue saying that it was ‘hard to believe’ that the witness learned about the events in Srebrenica ‘only after August’ 1995 ‘from the media’. Gajic said he would receive information from the military intelligence administration in the VJ General Staff and the security and intelligence sector in the VRS, but was never informed about the crimes in Srebrenica. The judge went on to note that ‘in that case the intelligence service was not effective and that is hard to believe’. It also beggars belief that a half of the officers in the VRS came from the VJ and were paid by it and yet they purportedly didn’t report to it, the judge said. Gajic clarified that the ‘counter-intelligence service had its registered sources but not all members of the army were under an obligation to send in information’. Judge Picard was not satisfied with the answer, saying ‘the witness’s answers are not very credible’.

Judge David then asked Gajic why General Dragomir Milosevic, commander of the VRS Sarajevo-Romanija Corps, asked Serbia to pay him injury benefit, rather than Republika Srpska. Gajic said that he was ‘not familiar with the case’ and refrained from answering because he didn’t want to give a wrong answer.

In the re-examination, Gajic had confirmed the defense’s argument that the VRS, SVK and the VJ were three separate armies, claiming that the VJ Security Administration could not issue orders in professional terms to any security body in the VRS or the SVK and never did so.

General Momcilo Perisic’s defense will call its next witness on Monday at his trial for the support he, as the chief of the VJ General Staff, gave to the VRS and SVK, thus contributing to their crimes in Sarajevo, Zagreb and Srebrenica.