In his cross-examination of Jean-Rene Ruez, who headed the OTP’s Srebrenica investigation team, the accused Zdravko Tolimir challenged the figures for the Srebrenica victims. Tolimir invoked a purported statement by Mirsad Tokaca, director of the Investigations and Documentation Center in Sarajevo, that the lists of people killed in Srebrenica contain the names of 500 persons who are still alive. Ruez suggested to Tolimir to call Tokaca as his defense witness 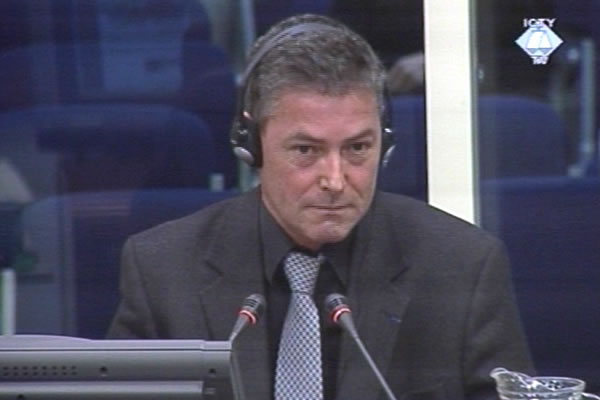 Jean-Rene Ruez, witness at the Zdravko Tolimir trial
Former head of the OTP’s Srebrenica investigation team Jean-Rene Ruez returned today to the courtroom to complete his cross-examination, postponed in late March 2010. Ruez was cross-examined by the accused, former chief of security in the VRS Main Staff Zdravko Tolimir, who is representing himself.

Tolimir dedicated most of the time in his cross-examination to the number of Srebrenica victims, trying to prove that the official number of almost 8,000 victims – 7,000 of them executed after the VRS troops entered the enclave – was an exaggeration. In Tolimir’s view, the numbers were inflated by adding the names of people killed in combat to the lists of victims of mass executions. Tolimir also argued that the names of people killed at other locations and even of living persons were added to the lists.

As key evidence for his argument, the accused showed the witness a news agency report on a statement by Mirsad Tokaca, director of the Investigations and Documentation Center from Sarajevo. Tokaca allegedly said that the lists of Srebrenica victims included the names of 500 people who were still alive. The witness replied he wasn’t aware of the statement and the prosecutor objected, saying that the accused was trying to mislead the judges when he said that Tokaca’s claim ‘has never been denied’. Although the Trial Chamber sustained the prosecution’s objection, Tolimir persisted in discussing the purported claim about ‘500 living residents of Srebrenica’. Finally, Ruez suggested to the accused to call Tokaca as his defense witness.

Another issue Tolimir insisted on was how many of the BH Army 28th Division troops moving in the column towards Tuzla were killed in action. Ruez noted that his crime investigation centered on the men who had either surrendered or had been captured and were then executed en masse, not on those killed in combat. Ruez said the exact number of the Srebrenica victims was still unknown; the final number will not be determined until all the secondary mass graves found in the meantime are exhumed.

Tolimir will continue and complete his cross-examination of investigator Ruez tomorrow.