HOW GENERAL DJORDJEVIC ‘GOT OUT OF THE MISERY’

Protected witness testifying under the pseudonym K-87 testified that General Vlastimir Djordjevic instructed him in the spring of 1999 to bury the bodies of Albanian civilians at the SAJ training ground in Batajnica. The witness added that Djordjevic appeared ‘pensive and edgy’, doing things ‘reluctantly’ on the orders of interior minister Vlajko Stoiljkovic 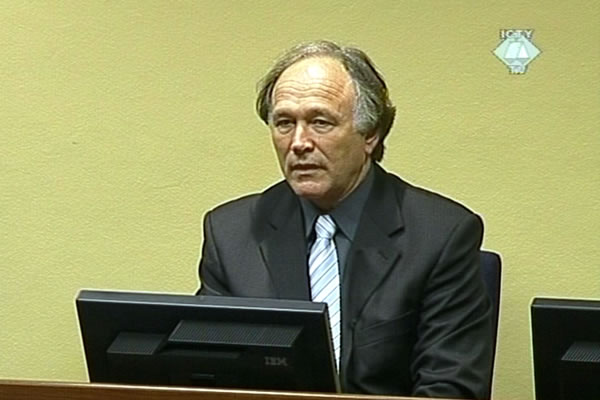 Vlastimir Djordjevic in the courtroom
The defense case of police general Vlastimir Djordjevic was interrupted today to allow the examination of the last prosecution witness who could not testify earlier because of ill health. The witness, a former member of the Special Anti-terrorist Unit (SAJ) of the Serbian MUP, testified with protective measures. In his earlier statements to the OTP investigators and in his evidence at the trial of the Kosovo Six in March 2007, the witness identified General Djordjevic as the person who issued the order to bury the bodies of hundreds of Kosovo Albanians at Batajnica near Belgrade in the spring of 1999.

Testifying via video link from Belgrade with image and voice distortion and under the pseudonym K-87, the witness confirmed the accuracy of the statement he gave to the OTP investigators in 2004. As presented in the summary of the statement, in mid-April 1999 the witness was summoned to the office of the chief of the Public Security Department, General Djordjevic. At a brief confidential meeting, General Djordjevic ordered the witness to organize the burial of bodies that had been brought from Kosovo in trucks at the SAJ training ground in Batajnica. The witness later received similar instructions from the accused on a few more occasions. The witness also communicated with Djordjevic through an associate, Bogdan Lipovac.

After the summary of the witness’s statement was read out, the prosecutor asked the witness only a couple of questions. Defense counsel Aleksandar Popovic then took one hour to cross-examine the witness. He didn’t even try to contest the claim that the accused general ordered the bodies to be buried at Batajnica, but he did suggest that Djordjevic had in fact been ordered to do so by interior minister Vlajko Stoiljkovic and complied against his will. The witness agreed in part with that claim. At the time Djordjevic did appear ‘edgy and pensive’, as a man who wanted to get the burial operation done as soon as possible, the witness said. ‘He did everything reluctantly and it seems to me that he wanted us all to finally get out of this misery’, the witness added.

As the witness recounted today, Djordjevic told him that the bodies belonged to victims of the NATO campaign who should be buried at Batajnica and ‘nobody is to be told about it’. Djordjevic ordered them to mark the burial site so that the bodies could be exhumed, identified and given a proper burial after the war. The exhumation of the bodies didn’t start before 2001, two years after the war ended and a year after Slobodan Milosevic’s regime crumbled. The accused general Djordjevic was a leading figure of the regime.

The witness went on to claim that Djordjevic said, ‘we should finish the task as soon as possible’. The fact that Djordjevic used plural indicates, according to the witness, that Djordjevic was conveying ‘somebody else’s order’, most likely interior minister Vlajko Stoiljkovic’s. In the re-examination the prosecutor put it to the witness that the orders could in fact have come from President Milosevic. The witness disagreed. According to him, Djordjevic used the word ‘boss’ but it is not likely that Djordjevic could presume to use it for the president. This led the witness to believe that Djordjevic meant the interior minister. Milosevic was labeled the mastermind of the joint criminal enterprise aimed at permanent elimination of Albanians from Kosovo by the Trial Chamber which sentenced five former Serbian officials. Vlajko Stoiljkovic was also indicted for the same crimes, but he killed himself in Belgrade in 2002.

General Djordjevic is on trial for crimes the Serbian police and army committed against Kosovo Albanians in 1999 and for organizing secret operations to cover up the crimes by hiding the bodies of civilian victims at several locations in Serbia. The trial continues tomorrow, with a testimony of a defense witness who is also expected to give evidence via video link.