Zoran Stankovic, pathologist from Belgrade, contends at the trial of police general Vlastimir Djordjevic that the number of bullet casings found at sites where crimes against Kosovo Albanians were committed in 1999 doesn’t match the number of gunshot wounds found on the bodies. The prosecutor reminded the witness that foreign forensic teams did not arrive in Kosovo until the NATO campaign ended. In the meantime, evidence could have been eliminated or lost 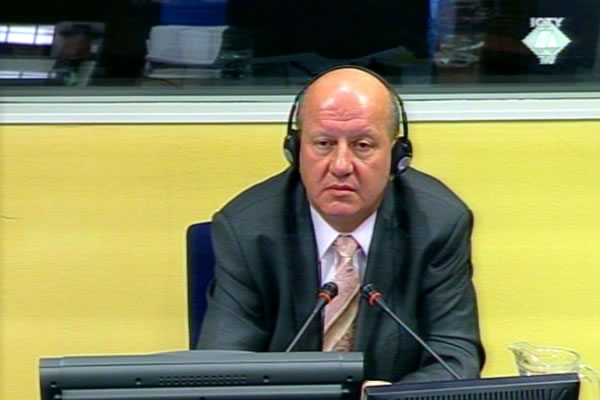 Zoran Stankovic, defence witness of Vlastimir Djordjevic
Prosecutor Kravetz today cross-examined Belgrade forensic pathologist Zoran Stankovic and tried to restore the credibility of the post mortem examinations conducted by French and Austrian pathologists on the victims of crimes in Kosovo, after he challenged the results yesterday. The crimes include the incident in the village of Kotlina where bodies of 17 Albanians were found in several local wells and the killing of more than 100 civilians in the village of Izbica. Both incidents are listed in the indictment against police general Vlastimir Djordjevic. Stankovic was called to give evidence by Djordjevic’s defense.

Yesterday the witness claimed that only 12 bullet casing were recovered near the wells in the village of Kotlina. There were 26 wounds on the 17 bodies. The witness concluded that they were killed elsewhere, possibly in combat. The prosecutor reminded Stankovic that Austrian pathologists did not reach the crime scene until six months after the crime, which happened in 24 March 1999, as alleged in the indictment. The prosecutor went on to suggest that somebody may have removed the bullet casings in the meantime. Stankovic allowed it was possible, noting nevertheless that Kosovo was ‘covered in bullet casings’ at the time; he couldn’t fathom why somebody would collect them in the village of Kotlina and not anywhere else.

Bullet casings recovered in the area around the bodies were a topic again when the examination moved to the crime in the village of Izbica. According to the indictment, on 27 March 1999 more than 100 Albanian civilians were executed there. Stankovic contended that the French pathologists’ report states only 84 bullet casings were recovered from the site. This, Stankovic went on, implied that the victims were killed somewhere else. The prosecutor reminded the witness that the French team also arrived in Kosovo after the NATO campaign in June 1999. Some bullet casings may have been lost in the course of the first exhumation done a month earlier by the Serbian side. Stankovic agreed, saying that ‘everything is possible’, but the fact remains that only 84 bullet casings were found.

The discussion then switched to the witness’s analysis of the video footage taken immediately after the killings in the village of Izbica. Noting that victims had mud on their shoes, Stankovic concluded that they had been brought in from another location. The prosecutor put it to the witness that victims may have been made to walk to the execution site through mud. Stankovic dismissed this, noting that in that case at least some of the mud would have fallen off as they walked in on the grass. The prosecutor then said that according to the testimony of the survivors of the massacre in the village of Izbica, it rained heavily on 27 March 1999 and the field itself could have been very muddy. The witness replied, ‘everything is possible but the video footage doesn’t show it’.

There will be a three-week break at the trial of General Vlastimir Djordjevic. The trial is expected to resume on Monday, 19 April 2010.