Zoran Stankovic, a pathologist from Belgrade, was called to give evidence by the defense of police general Vlastimir Djordjevic. Stankovic contends that the findings of French and Austrian forensic experts following their enquiry into the killing of Albanian civilians on several locations on Kosovo in 1999 are ‘unacceptable’. Contradicting the allegations in the indictment, Stankovic claims that murdered in the villages of Kotlina and Izbica were not civilians 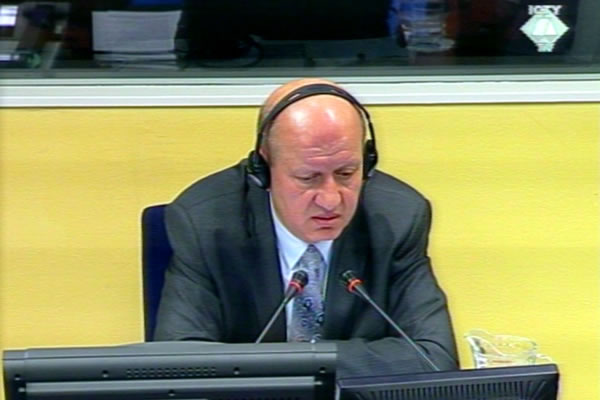 Zoran Stankovic, defence witness of Vlastimir Djordjevic
A forensic medicine expert from Belgrade, Zoran Stankovic, has challenged almost all the forensic findings related to the civilian victims presented by the prosecution at the trial of police general Vlastimir Djordjevic. Djordjevic is charged with murder and deportation of Kosovo Albanians in 1999. The defense called Stankovic as its expert witness and his expert report was admitted into evidence today. In the report Stankovic presents his own findings in detail.

According to Dr. Stankovic, the forensic reports of prosecution experts Eric Baccard and Jose Pablo Baraybar about the Albanian civilians who died in Bela Crkva, Mala Krusa, Djakovica, Izbica, Kotlina, Gornje Sudimlje and other places on Kosovo are ‘unacceptable’. They are often based on assumptions and contain numerous substantive errors. Almost 900 bodies of Kosovo Albanians were found in several mass graves in Serbia. The prosecution experts contend that most of the victims were not killed in combat.

Defense counsel Dragoljub Djordjevic asked the witness to explain in detail what made him contest the allegation in the indictment that the Serbian army and police killed 17 Albanian civilians in the village of Kotlina on 24 March 1999; their bodies were thrown into wells. As only about a dozen bullet casings were found near those wells, Stankovic concluded that the victims were killed somewhere else. Contradicting the findings of Austrian forensic experts who examined the bodies from the village of Kotlina, Stankovic claims that their wounds were ‘most probably inflicted in armed conflict’.

The pathologist from Belgrade disagreed with the findings of a French forensic team which examined the victims in the village of Izbica, killed on 27 March 1999. For Stankovic, the problem was in the conclusion presented by the French experts that some 150 persons were killed there: only 84 bullet casings were found on the spot. The witness argued that the video recording tendered into evidence by the prosecution showed bodies found at nine locations. The indictment alleges that the bodies were found at three locations.

Stankovic had already presented similar arguments at the trial of the Kosovo Six, when he testified in May 2008 as an expert called jointly by the defense teams of six former Serbian officials. The Kosovo Six were charged with same or similar crimes as General Djordjevic. Five of the six accused were sentenced to prison sentences from 15 to 22 years in February 2009. In the judgment, the Chamber accepted Stankovic’s arguments on the incident in Kotlina and rejected his findings about the killings in Izbica.

The Trial Chamber with Judge Bonomy presiding concluded that based on the evidence of the witnesses and forensic results it could not be established beyond reasonable doubt that any of the Albanians found in the wells in Kotlina had died as described in the indictment. On the other hand, in the case of the killings in Izbica, the judges relied less on the forensic findings than on ‘the reliable and credible’ evidence of Albanians who survived the execution. The judges found that the Serbian MUP personnel executed about 90 Albanian civilians in the village of Izbica.