After the prosecution called for a sentence between 35 years and life in prison for General Vlastimir Djordjevic, the defense in its closing argument tried to play down the role of the accused in the deportations and murders of Kosovo Albanians in 1999 and the transfer of bodies from Kosovo to Serbia 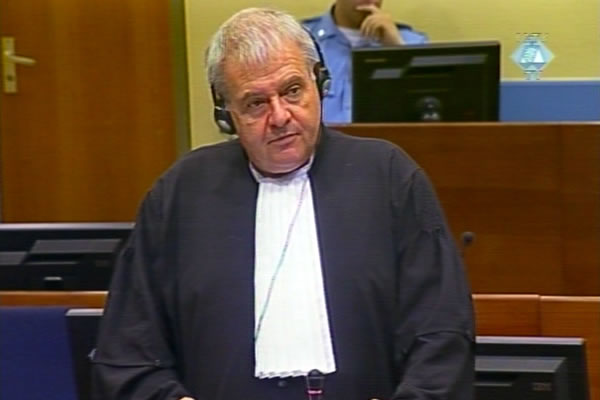 Dragoljub Djordjevic, defense counsel of Vlastimir Djordjevic
The defense of the former chief of the Public Security Department in the Serbian Police Vlastimir Djordjevic has called for their client’s acquittal. The defense argues he is not responsible for the deportations, persecutions and murders of Kosovo Albanians in 1999 and the transfer of bodies from Kosovo to Serbia. In his closing arguments today, defense counsel Dragoljub Djordjevic shifted the blame for the events in Kosovo on others, primarily the then Serbian police minister Vlajko Stoiljkovic and head of the MUP Staff for Kosovo, Sreten Lukic. The prosecution has asked for a sentence between 35 years and life in prison for the accused general.

Djordjevic’s defense counsel claims there was no joint criminal enterprise to expel Albanians from Kosovo and establish Serbian control over the province. There was no plan for their expulsion, he said, and the authorities’ intent to establish control over Kosovo was legitimate since it was Serbian territory.

The murders of Albanians were not planned, those were ‘isolated incidents caused by irresponsible individuals’, the defense claimed. The prosecution has failed to prove that the departure of about 800,000 Albanian civilians from Kosovo in the spring of 1999 was a result of police actions. According to the defense, they left ‘voluntarily’, in fear of NATO air strikes, the fighting and under the influence of KLA propaganda. The defense counsel contested the prosecution witnesses’ evidence about the organized transport of Albanians, noting that they took ‘regular trains’, allowing that ‘at the worst’, there might have been some ‘special departures’ because of the huge demand.

Although Djordjevic was, as chief of public security and assistant minister, in charge of all the police units in the field, the defense denies there was any link between him and the forces that committed crimes in Kosovo. According to the defense, the powers over the police units in Kosovo were taken away from him by a decision of 16 June 1998, in which minister Stoiljkovic established the MUP Staff for Kosovo. From that time onwards, the defense contends, the head of the MUP Staff, Sreten Lukic, was in charge of the police in Kosovo.

The defense did not reject entirely the allegations that General Djordjevic took part in the removal of the bodies from Kosovo and their transfer to several locations in Serbia in 1999, but he claimed it was all done on the orders of minister Stoiljkovic. The accused general ‘was surprised’ when he was told a refrigerated truck with the bodies of Kosovo Albanians had floated up to the surface of the Danube river near Kladovo and when he heard about the bodies from Kosovo being brought to the SAJ training area in Batajnica. The defense did admit that the accused had taken part in that operation, but to a limited extent, and exclusively by relaying Stoiljkovic’s orders. Stoiljkovic committed suicide in Belgrade in 2002.

Djordjevic’s defense counsel had obviously learned the lesson from the judgment handed down by the Trial Chamber to the five former Serbian officials where the close ties between the accused and the mastermind of the joint criminal enterprise, Slobodan Milosevic, was reflected on the severity of their sentences. Today, he said that Djordjevic ‘had no personal relationship’ with the then FRY president and had never received any tasks from him.

At the end of the hearing today, presiding judge Parker indicated that the parties and the public would be notified in due course about the date when the judgment would be handed down.