With the cross-examination of Radomir Milasinovic, a political scientist from Belgrade, the defense rested its five-month case at the trial of police general Vlastimir Djordjevic. Djordjevic is charged with crimes against Kosovo Albanians in 1999. The parties will deliver their closing arguments on 13 and 14 July 2010 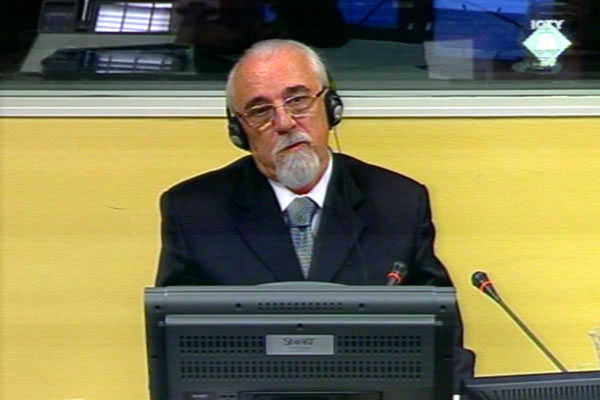 Radomir Milasinovic, defence witness of Vlastimir Djordjevic
At the beginning of the cross-examination today, prosecutor Stamp argued that Radomir Milasinovic, a political scientist from Belgrade, was not competent to testify as an expert on police issues. The witness was asked by the defense to draft an expert report on the role of the accused general Vlastimir Djordjevic in anti-terrorist actions in Kosovo in 1999. As alleged in the indictment, numerous crimes were perpetrated against Albanian civilians at the time when Djordjevic served as chief of the Public Security Department in the Serbian MUP.

The prosecutor put it to the witness that in his lengthy scientific career, Milasinovic had not published anything on public security and responsibility of police leadership before he wrote the expert report. Milasinovic explained that he dealt with the topic mostly in ‘internal studies’ and in an edited volume.

The prosecutor said the witness’s expert report was ‘full of uncorroborated claims’. The witness retorted that he didn’t have to name all of his sources, in particular not ‘empirical’ ones, meaning unidentified Serbs and Albanians he interviewed for his report in Kosovo. Thus, for example, the expert report notes that the police refrained from anti-terrorist operations in line with the October 1998 agreement on the cessation of hostilities and establishment of the verification mission. Asked how he knew that the police actually did cease their activities the witness said, ‘I heard it from several persons who took direct part in those events but I really cannot remember their names now’.

The cross-examination then moved to the main premise of the expert report: General Djordjevic didn’t have anything to do with the anti-terrorist actions in Kosovo. As the witness explained today, that segment of jurisdiction was ‘relocated from the authority of the accused’. In other words, after June 1998 the anti-terrorist operations came under the jurisdiction of the MUP Staff for Kosovo.

Noting that the expert’s evidence was ‘based on unidentifiable sources’, the prosecutor referred to earlier statements made by the head of the MUP Staff Sreten Lukic, showing a few minutes from police meetings in 1998 and Lukic’s 2002 statement to the OTP investigators. In his statement, Lukic claims that Djordjevic issued orders to the police on Kosovo. Asked why Lukic would want to ‘misrepresent reality’ the witness said he didn’t know.

Radomir Milasinovic completed his evidence and General Vlastimir Djordjevic’s defense rested its case. The defense case started on 1 December 2009; it took about five months, minus the breaks. Presiding judge Parker indicated that the Trial Chamber expected both parties to submit their final briefs by the end of June 2010. Closing arguments of the prosecution and defense are scheduled for 13 and 14 July 2010.