HOW THE DRINA CORPS ARCHIVES CROSSED THE DRINA RIVER

The OTP investigator described at the trial of Zdravko Tolimir the perambulations of the VRS Drina Corps archives in 1995 from Vlasenica, to Bijeljina and Sokolac in BH and from there to Mali Zvornik and Gornji Milanovac in Serbia. In 2004, the archives was finally found in a building used by the Army of Serbia and Montenegro 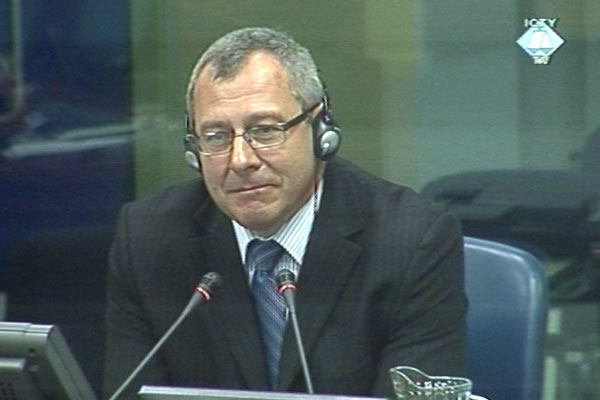 Tomasz Blaszczyk, witness at the Zdravko Tolimir trial
OTP investigator Tomasz Blaszczyk testified at the trial of Zdravko Tolimir about the so-called ‘Drina Corps collection’. The collection contains military documents, maps and photographs from the period relevant for the indictment against General Mladic’s assistant, who is charged with genocide and other crimes in Srebrenica and Zepa in July 1995.

In December 2004, the collection was found in Gornji Milanovac, in a building used by the Army of Serbia and Montenegro (SCG). The documents were handed over to the RS Defense Ministry and taken back to Banja Luka, where they were handed over to the OTP investigators. The government of Serbia and Montenegro sent a letter to the OTP in The Hague stating that the Drina Corps documentation had been transferred to Serbia in 1998, purportedly without the knowledge of the ‘host’, the SCG Army. Blaszczyk confirmed that the letter was authentic.

As Blaszczyk recounted, the OTP learned about the collection and its perambulations from VRS witnesses; it was also able to obtain copies of some of the documents. Some copies were found in the VRS archives in Banja Luka while others were provided by the defense of General Krstic, former Drina Corps commander.

Although the collection is comprehensive, Blaszczyk contends that it’s not complete: some of the documents about security and intelligence affairs are missing and there are ‘a lot of gaps’ among the operational documents. The Drina Corps collection contains 315 pages of documents, 3,500 photos and 360 maps of the area of responsibility of the VRS Drina Corps in 1995.

In his replies to the accused Tolimir, Blaszczyk confirmed that in 1992 he was deployed in Petrinja and Daruvar – the territory of the so-called Republic of Serbian Krajina (RSK) - as a member of the UN forces. Tolimir asked the witness to explain why he used the term ‘so-called’ for the RSK, and whether he did so on the orders of the UN. Blaszczyk denied he had received any such orders from the UN, adding that officially the RSK was part of Croatian territory and was not in existence any more.

Zdravko Tolimir didn’t complete his cross-examination of the OTP investigator as he refused to give up any of the 100-odd questions he had prepared. As Tolimir explained, it was his intention to show through his examination of the witness that the ICTY Registry didn’t abide by the principle of ‘equality of arms’ because it ‘refuses to pay for an investigator for the defense’. Blaszczyk will continue his evidence later and the trial continues next week with another prosecution witness.