WHO MADE SESELJ’S UNWILLING WITNESS TO ‘CHANGE HIS MIND’

How did witness Zoran Rankic, former deputy head of the Serbian Radical Party War Staff, decide to repudiate the statements he had given to the OTP and talk to Vojislav Seselj’s defense instead 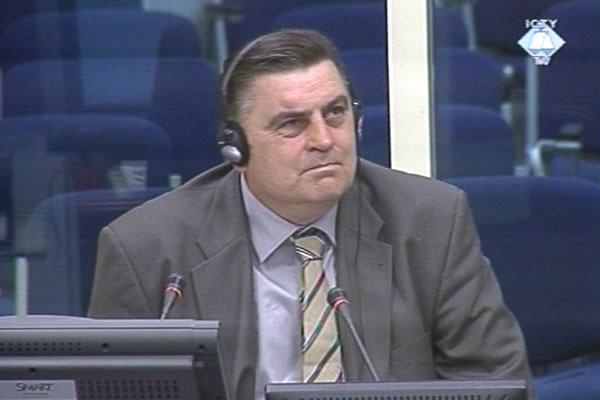 Zoran Rankic, witness at the Vojislav Seselj trial
Responding to the prosecutor’s questions, former deputy head of the Serbian Radical Party War Staff Zoran Rankic gave his version of the interviews with the OTP investigators. Rankic also explained how five statements he had signed between 2003 and 2006 were drafted. The witness now contends that he gave the statements after the OTP threatened him; he also claims that in 2006 he was ‘kidnapped’ by the OTP.

The prosecutor asked Rankic if the OTP investigators ‘beat him up’ and if they ‘carried arms’. The witness denied it, saying he has ‘never heard of any armed investigators’. Rankic went on to say that in 2003 he signed a statement in English after an interpreter read out the text to him, interpreting it directly ‘from a laptop’. The witness never received a copy of that statement in Serbian.

When asked why he didn’t tell anyone about the prosecution’s threats, Rankic replied that it ‘is ridiculous to file a complaint against an international institution to the Serbian police’. He didn’t even tell the press ‘because my honor would not allow it’, as he explained. Instead, Rankic said, ‘I waited to have my day in court’. Now he is in court, but only after the Trial Chamber issued two subpoenas compelling him to testify. Rankic explained that he didn’t comply with the first subpoena ‘for health reasons’; he was able to corroborate his claim with medical documents.

Prosecutor Biersay asked Rankic if it was true that in June 2006 he told the OTP about the ‘threats’ he and his family received in Serbia, when Rankic was ‘told not to gamble with his life at stake’. Today Rankic said the investigators fabricated those claims. As for the threats, they were made by ‘an idiot who was a protected witness at the Seselj trial’. The witness confirmed that the ICTY witness protection service then started the procedure to move him to Sweden. In October 2006, Rankic was moved to The Hague, where he was supposed to stay for a month before and after his testimony; he was given keys to a flat and €25 per day for expenses. Rankic described this event as ‘kidnapping’: not a ‘classical kidnapping’ but, as he put it, ‘using tricks to take one away’. Rankic decided he didn’t want to be relocated in January 2007 after he made a call to Swedish embassy and concluded that the OTP ‘hadn’t done anything’.

Seselj opened his cross-examination of the witness by reading from a statement the OTP had taken from a translator. The statement goes on to say that Rankic’s interview in 2003 was ‘tense’, the investigator ‘tore up some pages of the statement’ and ‘changed some paragraphs’. In the words of the translator the witness ‘said that he would sign everything’ because he trusted her translation. The witness confirmed what Seselj suggested that he ‘signed things that were not true’.

The witness then read paragraph by paragraph from the witness’s statement in an effort to prove that the prosecution had in fact drafted a document that Rankic now claimed was completely inaccurate. The witness responded to the quotes from his statement saying ‘this is not correct’, ‘this is the first time I hear of it’, ‘this is just ridiculous’.

Based on what Seselj read out, Rankic described to the OTP investigators the involvement of the SRS in transferring the volunteers to Croatia and Bosnia and Herzegovina, provided details about the speech the accused made in Vukovar, where he said that ‘no Ustashas will leave the town alive’, and linked the accused with the Yellow Wasps unit that was responsible for the crimes in Zvornik.

Rankic could be the last witness summoned by the Trial Chamber, unless the judges decide to call the two remaining witnesses despite their alleged health problems. A Rule 98 bis hearing will follow. The accused will ask for his acquittal on the grounds that the prosecution failed to prove his guilt on any of the counts in the indictment. Before scheduling the Rule 98 bis hearing, the Trial Chamber has to rule on a number of prosecution motions, including the motion to admit into evidence Seselj’s interviews, speeches he gave in the National Assembly and excerpts from newspaper articles. The Trial Chamber has indicated that the Rule 98 bis hearing may take place in late August or September 2010.