In his reply to the judges, former Serbian Chetnik Movement volunteer Nenad Jovic explained how his conscience suddenly stirred four years after his first statement to the OTP investigators, prompting him to switch sides and testify in Seselj’s defense 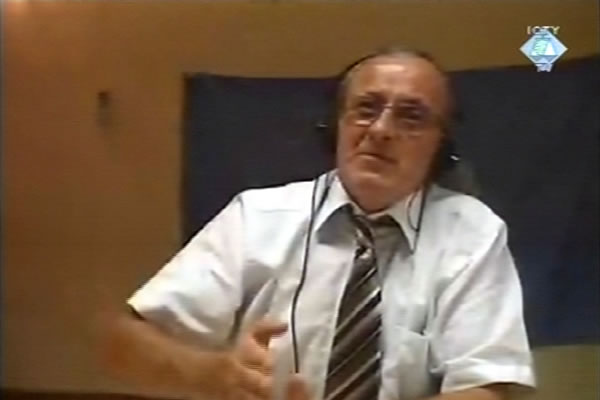 Nenad Jovic, witness at the Vojislav Seselj trial
The last witness called by the Trial Chamber at the trial of Serbian Radical leader Vojislav Seselj is Nenad Jovic from Mali Zvornik. Jovic is yet another ‘Chetnik insider’ who first agreed to testify for the prosecution only to suddenly change his mind and cross over to the defense. In 2003, Jovic showed up in the Tribunal’s office in Belgrade and asked to testify in the case against his former president. This is what the prosecution documents stated. Today the witness denied that he volunteered to testify, claiming he had received a written summons from the prosecution. The witness said he lost that paper.

The about-turn happened in December 2007 when the witness told the Serbian media that he had crossed over to the defense despite the fact that he had previously given several statements to the OTP. In his statements, the witness described the operations of the Serbian Chetnik Movement (SCP) and the Serbian Radical Party volunteers on the battlefields in Croatia and BH. Presiding judge Antonetti asked the witness why he suddenly turned into a defense witness. Jovic explained that he had given and signed statements to the OTP investigators under duress: he was threatened and blackmailed. Jovic added that he was even offered to stay in The Hague for six months with ‘and be serviced by beautiful girls’.

After some time he ‘gave it some thought’ and he decided to recant everything he had stated because ‘his conscience and reputation suffered’, the witness said. Judge Antonetti reminded the witness that in the fall of 2007 he told the OTP that he had met representatives of Seselj’s defense, Gordana Pop-Lazic, Vjerica Radeta and Zoran Krasic. Seselj’s representatives interviewed the witness in order to ‘discredit the prosecution’. As the presiding judge noted, the statement ‘gave the impression that at the time the witness said he had given his statement to the representatives of Seselj’s defense under pressure’. Jovic didn’t give a straightforward answer to that.

The witness didn’t deny that he joined the SCP in the spring of 1990 after a rally in Mali Zvornik where Seselj spoke to the crowd. Next year, the witness was sent to the village of Tenja in Croatia together with a unit of Chetnik volunteers. In his statement to the OTP investigators, the witness said that in August 1991 he left the unit ‘because Chetniks drank a lot and looted’. Today in his reply to Judge Harhoff, the witness denied this, saying that he had to go back home because his wife lied to him that his daughter was ill to make him return from Croatia.

Jovic then returned to Baranja, this time not as a member of the SCP. In the spring of 1992, Jovic took part in the attack on Zvornik as a volunteer of the ‘police of the Serb people in BH’. In his statements to the OTP investigators, Jovic claimed that Arkan’s men were among the attackers, as were Zuco’s group and about 50 Seselj’s Chetniks. Today the witness recanted the part of his statement about Chetniks. As Jovic explained today, in fact they were the local Serbs who wore Chetnik insignia on their uniforms. Judge Lattanzi then reminded the witness that in his statement to the OTP he had said that ‘Seselj’s men’ were expelled to Serbia soon after Zvornik was captured because they ‘raped women’. Jovic said he felt like crossing himself when he heard what was contained in that document.

It was indicated earlier that two names remained on the trial Chamber’s witness list. Today the judges said Jovic was the last witness they called and managed to bring before the Tribunal. Jovic gave evidence via video link from Belgrade. As the hearing today drew to a close, the prosecutor started cross-examining the witness. The accused Seselj will examine the witness tomorrow. Seselj is charged with crimes against non-Serbs in Croatia, Vojvodina and BH.