ANOTHER UNWILLING WITNESS AT THE SESELJ TRIAL 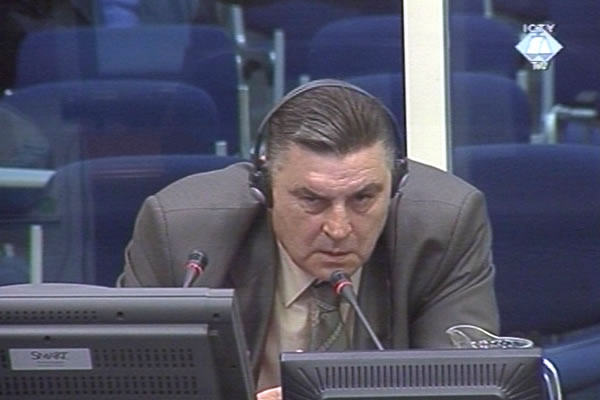 Zoran Rankic, witness at the Vojislav Seselj trial
The trial of Serbian Radical leader Vojislav Seselj continued after a lengthy break with the evidence of the last witness called by the Trial Chamber. Zoran Rankic is a former deputy head of the Serbian Radical Party War Staff. Like most ‘SRS insiders’ summoned to testify by the Trial Chamber, Rankic was first listed as a prosecution witness, but he changed his mind and decided to testify for the accused.

Replying to questions asked by presiding judge Antonetti, Rankic offered the same explanation as the previous witnesses who have decided to switch sides: when he gave his first statement to the OTP investigators in 2003 ‘my family was under pressure and I was threatened I would be arrested’. The witness described how an OTP investigator ‘tore up’ his first statement and told him to ‘testify properly’, since the prosecution knew he was ‘not innocent’ and that he took part in the ‘events in Bosnia’. At that time, the witness was, as he said, ‘anxious and scared, divorced, without a job; I started drinking and my health deteriorated’.

Rankic contends that after the first statement he was ‘forced’ to give two more statements to the OTP, in 2004 and 2006. The statements were not true but he had to sign them “to save his head’, Rankic claimed. In late 2007, Rankic finally ‘called the SRS’, wrote a new statement and gave it to Vojislav Seselj’s defense team.

Answering the judges’ questions, Rankic gave the ‘official version’ of the procedure for the recruitment and transfer of volunteers to the battlegrounds in Croatia. Rankic’s explanation is similar to that of other ‘SRS insiders’ who ‘changed their minds’ about their testimony. Local Territorial Defense staffs in Croatia sent ‘requests for personnel’, the SRS boards got in touch with those who wanted to fight, the war staff selected the volunteers and sent them to the training center Prigrevica, Rankic said. From there, Rankic took volunteers to Croatia where he handed them over to the local TO staffs. From that moment on, the local Territorial Defense staffs had ‘operational command’ over the volunteers. After October 1991, when the JNA began fighting ‘the secession forces’, the volunteers were placed under its command, the witness said.

Rankic repudiated today his statement to the OTP that in the spring of 1992 Seselj was in Zvornik. Rankic also denied his claim that in 1991 Seselj said that ‘no Ustashas may leave Vukovar alive’. As Rankic explained today, he said that at the ‘suggestion of the prosecution’.

Tomorrow, Rankic will be cross-examined by the prosecution and the accused Seselj, who is on trial for crimes against humanity in Vojvodina, Croatia and BH.