FOURTH TESTIMONY OF A SURVIVOR FROM THE PETKOVCI DAM

The testimony of a survivor from the Petkovci dam was admitted into evidence at the trial of Zdravko Tolimir. As alleged in the indictment, about 1,000 Bosniaks captured after the fall of Srebrenica were executed there on 14 and 15 July 1995 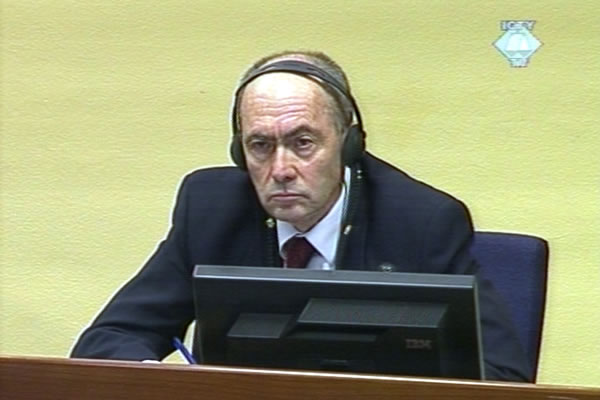 Zdravko Tolimir u sudnici Tribunala
Protected witness PW 015 survived the execution of about 1,000 Bosniaks at the dam near the village of Petkovci, in the Zvornik area, on 14 July 2010. The witness already gave evidence four times before the Tribunal. At the trial of Zdravko Tolimir, former chief of security in the VRS Main Staff, the witness’s testimony from the trial of Radislav Krstic in April 2000 was admitted into evidence.

In a summary of the statement read by the prosecutor, the witness recounted that on 11 July 1995 he joined the column of soldiers and civilians pressing through the woods towards Tuzla after Mladic’s troops entered Srebrenica. The column was shelled and the people scattered. The group the witness was in couldn’t rejoin the column and decided to surrender to the Bosnian Serb soldiers on 12 July 1995 at a field near the village of Sandici.

The witness was first held captive in a hangar in Konjevic Polje. From there, he was transferred to a football field in Nova Kasaba; there the prisoners were ordered to leave all their personal belongings. The witness estimated that there were about 2,000 prisoners on the pitch. After Ratko Mladic spoke to the prisoners, they were put onto trucks and taken to the school in Petkovci, near Zvornik. The prisoners were detained in classrooms. Serb soldiers abused them and beat them up, asking them to hand over their money, jewelry and other valuables.

Next day, on 14 July 1995, the prisoners were taken out in groups of five and transported by truck to the dam in Petkovci. When he got off the truck, the witness saw a mass of dead bodies. The soldiers opened fire and the witness tried to crawl under the dead bodies. The witness was slightly wounded, and remained there, playing dead. The execution went on until dark when the witness and another survivor managed to escape the execution site and hide until dawn. In the morning, they saw heavy earth-moving machinery removing the dead bodies. That same day the two of them managed to reach the territory under the control of the BH Army.

On photos shown by the prosecutor, the witness identified the locations where he was detained and the dam near the execution site. The accused Tolimir tried to contest the witness’s evidence, challenging his estimates of the number of prisoners detained and executed in the incident. Tolimir also tried to challenge the witness’s status, claiming he could not have been treated as a civilian when he surrendered. The witness explained that after he was wounded in late 1992 he worked in the civil sector as a humanitarian worker. The witness was drafted again before the end of the war after he managed to reach the free territory from Srebrenica.

In his cross-examination, Tolimir in particular insisted on ‘the inconsistencies’ in the witness’s evidence. In his previous testimony, the witness had stated there were 13,000 to 14,000 men in a column heading towards Tuzla while today he maintained there were 15,000 men in the column. Tolimir kept pressing the issue even after the witness told him several times that the people were trying to save their lives and were not counting heads. This prompted the presiding judge to interfere, urging the accused to move on to another subject.

The prosecution had no additional questions for the witness. The trial of General Tolimir for genocide and other crimes in Srebrenica and Zepa continued with the evidence of OTP investigator Tomasz Blaszczyk.