FOLLOWING THE TRAIL OF SREBRENICA CRIMES

Former head of the OTP Srebrenica investigation team Jean Rene Ruez completed his examination-in chief at the trial of Zdravko Tolimir. The former chief of security in the VRS Main Staff is charged with genocide and other crimes in Srebrenica and Zepa in 1995 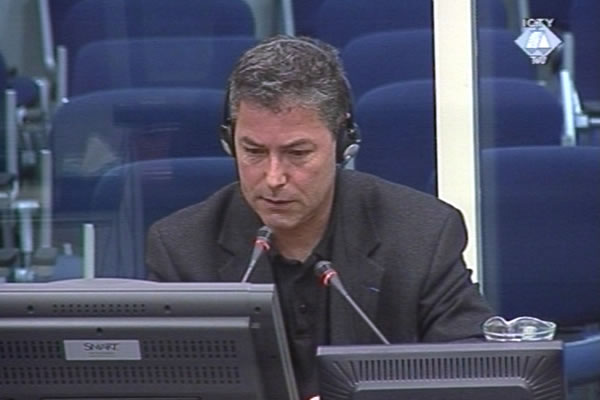 Jean Rene Ruez, witness at the Zdravko Tolimir trial
On the second day of his evidence at the trial of Zdravko Tolimir, former head of the OTP Srebrenica investigation team completed his presentation of the investigation his team started immediately after the fall of the Srebrenica enclave in July 1995. In late June 1995, Ruez was already in Tuzla; he arrived in Srebrenica for the first time in early 1996.

Yesterday, the witness identified the routes the population used to withdraw from the enclave before the VRS troops which entered Srebrenica on 11 July 1995. Ruez continued to mark the spots where men were gathered and separated from the women and children, where parts of the column heading towards Tuzla surrendered or were arrested and places where prisoners of war were detained. Today Ruez showed on the map of Eastern Bosnia locations where Bosniak captives were executed and buried.

The investigation established that executions took place at the Branjevo military farm, the dam near the village of Petkovci, in a field near the school in the village of Orahovac, in the village of Kozluk, in the Cerska valley and in Pilica, where in the summer of 1996, the investigators found the Culture Hall, locked and undisturbed. On 16 July 1995, about 500 prisoners were executed there. Photos and video footage taken in the hall show how samples of ‘blood, hair and human tissue’ were recovered from the walls and various personal belongings and documents were found on the floor.

Ruez showed the locations of primary graves on the maps: in most cases, they were close to the execution sites. Ruez also showed the so-called secondary graves. The victims’ remains were moved from primary graves and reburied there.

[IMAGE]4688[/IMAGE]With a series of photos, aerial shots and video footage, Ruez identified those sites and explained the procedure of locating and exhuming mass graves. Aerial photos provided by the US government were of particular importance for the identification of secondary graves. By comparing photos of the terrain taken over a period of three to four weeks, the investigators could see the difference in the soil structure, indicating that it had been dug up.