Using maps and photos, including aerial shots, French investigator Jean Rene Ruez, former head of the Srebrenica investigation team, reconstructed the events in the Srebrenica events from 11 to 17 July 1995 at the trial of General Zdravko Tolimir 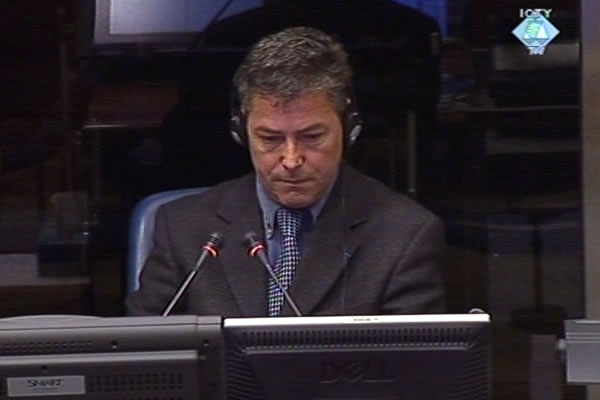 Jean Rene Ruez, witness at the Zdravko Tolimir trial
As early as in 1996, former chief of the OTP Srebrenica investigation team, French investigator Jean Rene Ruez used the survivors’ statements to identify and visit all key locations and was thus able to reconstruct the events after Mladic’s troops entered the enclave on 11 July 1995. He would revisit many of them in the years that followed as he took part in the effort to locate and exhume mass graves in that area.

On maps made during the investigation, Ruez marked all the key points relevant for the reconstruction, starting with the movement of the Srebrenica residents on 11 July 1995: women, children and the elderly headed towards Potocari while the soldiers from the BH Army 28th Division and men of military age set off for Susnjari and Jaglici. A series of photos, including aerial photos taken by the US government, was shown to illustrate those locations. Ruez noted that footage filmed by Zoran Petrovic Pirocanac in the area on 13 and 14 July 1995 was of particular importance for the investigation. Pirocanac was a propaganda journalist from Belgrade.

In Potocari, Petrovic filmed the so-called white house. Men who had previously been separated from their families were detained there, but this footage soon disappeared from the tape, as did two other clips, one showing a column of Bosniaks being fired on from an anti-aircraft gun as they were heading towards Tuzla and the other, of a pile of dead bodies in front of the warehouse gate in Kravica. According to Ruez, the journalist from Belgrade deleted those parts because they were evidence of the crimes after the fall of Srebrenica.

The men from the white house in Potocari were put on buses and driven to warehouses and schools in various locations in Bratunac and its surroundings. Ruez marked those locations on the map and illustrated them with photos from his book. A field near the village of Sandici was marked as a place where a column of Bosniaks surrendered and taken prisoner. On aerial photos taken in the summer of 1995, provided by the US government, Ruez showed locations where Bosniaks who had surrendered were gathered. The aerial photos also show buses in which some of the prisoners were taken to the nearby warehouse in Kravica.

The prosecution contends that almost 1,000 prisoners were executed in the warehouse. Ruez didn’t want to make any estimates himself. He went on to comment on a series of photos showing both the interior and the façade of the warehouse he had taken on several occasions in 1996 and 1998. In comparison with the photos taken by Zoran Petrovic Pirocanac, these photos show that when the Belgrade journalist drove by a heap of bodies in front of the warehouse gates with Ljubisa Borovcanin in a car, the execution of Bosniaks detained in the warehouse was still going on.

The investigators were able to identify locations where Bosniak captives were executed on the basis of the survivors’ statements, aerial photos showing disturbed earth and the evidence they recovered in the field – different caliber shells, personal possessions, documents and items of victims’ clothing. A series of photos of execution sites near Orahovac and the Petkovci Dam was shown in the courtroom. Ruez marked the locations where Bosniak prisoners were executed based on the survivors’ statements.