The accused Zdravko Tolimir today cross-examined Mevludin Oric, one of the three survivors from the execution site in Orahovac, where more than a thousand Bosniak prisoners were executed on 14 July, as alleged in the indictment. Tolimir put it to Oric that he may have been in a column of men from Srebrenica who reached Nezuk on 16 July, and asked for his photograph in order to conduct an expert analysis comparing it to the footage of the column of soldiers and civilians moving into the free territory 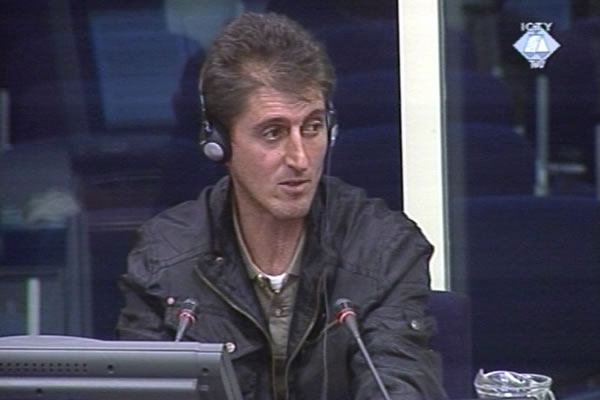 Mevludin Oric, witness at the Zdravko Tolimir trial
Mevludin Oric is one of the three survivors from the execution site in Orahovac; the prosecution alleges that on 14 July 1995, about a thousand Bosniaks were killed there after the fall of Srebrenica. Oric testified several times before the Tribunal. At the trial of Zdravko Tolimir, Mladic’s assistant for security and intelligence in the VRS Main Staff, Oric merely confirmed the accuracy of his evidence at the trial of seven Bosnian Serb military and police officers for crimes in Srebrenica.

Oric was in the 28th Division of the BH army when Mladic’s forces entered Srebrenica on 11 July 1995. He and the squad under his command joined a column of soldiers and civilians trying to break through to Tuzla through the woods. He was captured on 13 July and taken to Bratunac. He spent the first night of his captivity on a bus, listening to the ‘moans and bursts of gunfire’ from a nearby school. On 14 July he was taken to the school in Orahovac. The same day, the prisoners were taken from the school to a nearby meadow and shot. Oric miraculously survived. Next day before dawn he managed to escape from the execution site, wandered in the woods for some days and then on 21 July 1995 manager to reach the territory controlled by the BH Army.

In the five-hour cross-examination, the accused Tolimir, assisted by his legal advisor, tried to challenge Oric’s evidence, putting it to him that on 14 July 1995 he was not in Orahovac, but in a column that reached Nezuk on 16 July. He showed the witness a video recording of the column being welcomed by the BH Army soldiers in Nezuk, claiming that the witness could be seen on the footage. Oric denied it, and the accused demanded to be given the witness’s photograph; he wants to do an expert analysis to see whether Mevludin Oric was in the column that reached the free territory on 16 July.

Tolimir also showed BH Army documents about the preparations for an operation to link up the two enclaves, Srebrenica and Zepa, and about the weapons, ammunition and other materiel brought to Srebrenica to that end. Oric said he saw the documents for the first time, he knew nothing about the plans for any such operation and that the platoon he commanded in July 1995 had only one rifle.

The second argument of the accused was that the 28th Division soldiers moving in a column towards Tuzla fought and killed each other. Tolimir brought up the statements made by the two commanders of the 28th Division in August 1995, but the witness said he knew nothing about any clashes in the column as it was trying to push through into the free territory. He didn’t see either of the commanders at the time.

The trial will continue on Monday with the testimony of a new prosecution witness.