The prosecution today cross-examined the former member of the HVO criminal investigations division in Mostar, Zvonko Vidovic. Prosecutor West noted that 77 percent of the prisoners in Heliodrom camp were in fact civilians. The witness agreed that this could be concluded based on the documents. Vidovic however noted that ‘it was impossible to verify’ if those who claimed they were not soldiers spoke the truth 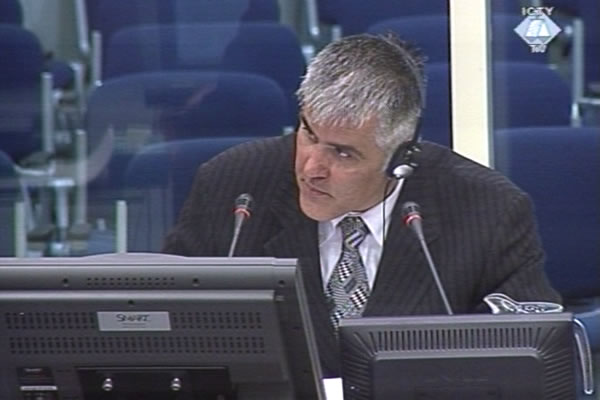 Zvonko Vidovic, defence witness of Valentin Coric
In his evidence in the defense of Valentin Coric, Zvonko Vidovic contended that he and several other members of the criminal investigations division (CID) in the HVO military police ‘merely registered’ the prisoners in the Heliodrom camp. Those were, as he said, ethnic Muslim members of the HVO ‘disarmed for security reasons’ in early July 1993 because of possible ‘betrayal and defection to the BH Army’.

In the cross-examination, the prosecutor noted that the personal data recorded by the ‘surveyors’ from the CID indicate that 23 percent of the detainees were ethnic Muslim HVO soldiers. The remaining 77 percent were civilians. The witness agreed that the documents appeared to show that. However, at the time ‘it was impossible to verify’ if those who claimed they were not soldiers spoke the truth.

Prosecutor Kimberly West noted that in Heliodrom, civilians were never separated from other prisoners; they were often taken to the front lines to do forced labor. Many of them were wounded or killed there. According to the prosecution’s documents, 56 persons died in those incidents from July to December 1993, and 191 persons were wounded.

The witness claimed that the criminal investigations division investigated cases like that ‘if prisoners were under its jurisdiction’, that is, if they were registered by the CID. The judges prompted the witness to name an example but the witness couldn’t remember any case when the CID’s investigation resulted in charges against the culprits.

The prosecutor brought up 66 memos Stanko Bozic, warden of the military remand prison, sent to the witness from July to 1993. Bozic told the witness about the practice of illegal use of prisoners to do forced labor. West put it to the witness that those cases were not investigated because the HVO didn’t consider using prisoners for forced labor a crime. The witness said he ‘cannot speak on behalf of the HVO’ remaining adamant that his service did its job. Vidovic repeated several times that he didn’t understand why Bozic wrote to him about things his service was not responsible for.