‘ISOLATED INCIDENTS IN THE MIDDLE OF A WAR’

Zvonko Vidovic, former member of the criminal investigations division in the HVO military police in Mostar, said that the cases where Muslims were evicted from their apartments, forced to go to East Mostar, and had their property looted, were ‘isolated incidents’. The witness contends that they were not part of the plan to ethnically cleanse the town, as alleged by the prosecution 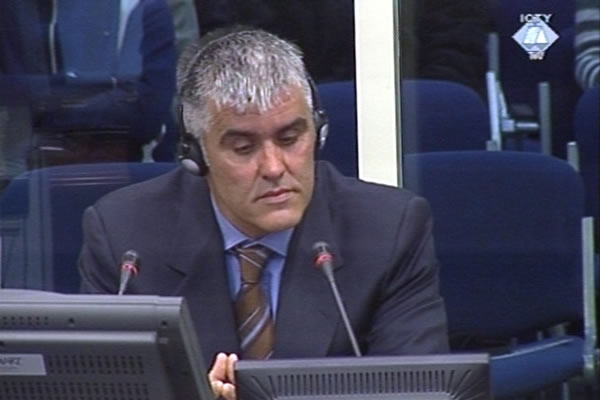 Zvonko Vidovic, defence witness of Valentin Coric
Valentin Coric’s defense continues its case with the testimony of Zvonko Vidovic, former member of the criminal investigations division in the HVO Military Police in Mostar. As Vidovic explained today, his main task was identifying and prosecuting those who committed crimes.

In his examination-in chief, Vidovic said that the criminal investigations division in the military police in Mostar was first part of the 3rd Battalion of the HVO Military Police, then in the summer of 1993 it became part of the 5th Battalion. The witness said that both battalions were subordinated to the commander of the Southeastern Herzegovina Operational Zone.

In his evidence, the witness said that Mostar was a ‘war zone’; in the summer of 1992 after the conflict with Serb forces ended, there was ‘neither war nor peace’. When the conflict escalated between the HVO and the BH Army in May 1993, Mostar once more became a war zone overcrowded with refugees and soldiers.

Also, the witness said, it was hard to distinguish civilians from soldiers because all men in Mostar, and ‘quite a few women too’, wore military uniforms. Some of them were active military personnel and others did it to ‘hide the fact that they were not in the army’, the witness explained. This made is more difficult for the CID to do its job.

Coric’s defense brought up a number of criminal reports against those who committed various crimes, from forced entry, looting, confiscation of apartments to rape and murder. The defense also showed criminal reports filed against some of the members of the Convicts’ Battalion. Slobodan Praljak and Milivoj Petkovic, indicted for those crimes, maintain that the Battalion was not a part of their chain of command.

The witness described incidents when Muslims were evicted from their flats, forced to go to East Mostar and then had their property looted as ‘isolated incidents’, and not part of a plan to expel Muslims who lived in Mostar from the western to the eastern part of the town, as alleged by the prosecution. ‘Those were groups of people who committed crimes in the middle of a war’, the witness said, adding that his service fought against those people.

Coric’s defense counsel Dijana Tomasegovic Tomic brought up to the case of Vedran Bijuk aka Splico. In July 1993, Bijuk was involved in forced entry and looting of some 80 flats in western part of Mostar.

In reply to presiding judge Antonetti, the witness said that in August 1993 a ‘large number’ of Muslims lived in Western Mostar. When the judge asked Vidovic to be more precise, Vidovic said that there were ‘thousands’ of them. Vidovic continues his evidence tomorrow.