VEHICLES IN ‘SAFEKEEPING’ OF MILITARY POLICE

In his examination-in chief, Zdenko Andabak accused the HOS of looting Muslim homes and businesses in Prozor. The prosecutor showed evidence that members of the witness’s military police battalion illegally seized some 30 vehicles in late October 1992. The witness explained that the unit confiscated just a few vehicles ‘for safekeeping’ 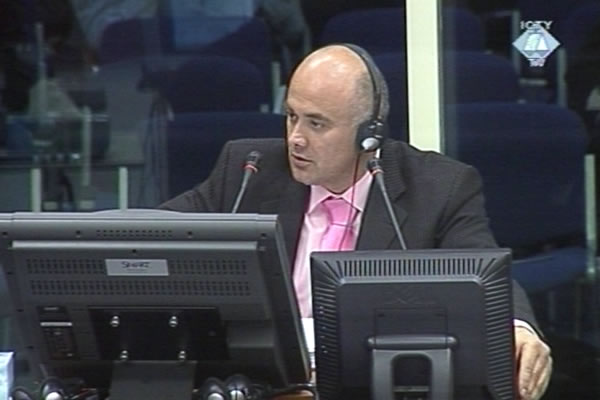 Zdenko Andabak, defence witness of Valentin Coric
Former military policeman from Livno Zdenko Andabak is testifying in defense of former chief of the HVO Military Police Administration Valentin Coric. In October 1992, Andabak said, ‘I found myself spontaneously’ in Prozor, just in time for the conflict between the HVO and the BH Army which broke out in that town. In the two-day conflict, Andabak saw HOS members looting Muslim apartments and public institutions in the town.

The witness contends that in October 1992, on the order of Coric’s deputy, Radoslav Lavric, he took off with the 2nd Battalion of the Military Police to help the HVO in Jajce. They tarried in Prozor because the ‘Mujahideen’ did not let them pass through a check point. According to the witness, the conflict in Prozor was not planned; it broke out when Bosniaks killed two Croats there.

In the cross-examination the prosecutor showed the witness a document drafted by the HVO Security Intelligence Service on 8 November 1992. The document states that the military police were involved in the looting in Prozor, proposing the dismissal of their commanders. It is possible that ‘some military police members did not comply with the rules’, Andabak said, denying that his unit was involved in such ‘dishonorable acts’.

The prosecutor went on to show Andabak a report drafted by Zeljko Siljeg, commander of the Tomislavgrad Operational Zone, on 25 October 1992. The report explicitly states that Zdenko Andabak’s military police unit returned from Prozor to Livno with 30 illegally confiscated vehicles. ‘If it had been true, I would have been arrested’, the witness replied, adding that Siljeg was ‘obviously misinformed’. On his way from Prozor, the witness met a unit that Siljeg trusted. ‘They probably thought that some vehicles that were our property had been illegally confiscated and they reported it’, the witness clarified.

It was only when the witness was shown the order to return all vehicles in possession of the 2nd MP battalion, issued by Coric and Praljak on 14 November, that the witness remembered that ‘four or five’ vehicles had indeed been confiscated. The witness explained that members of his battalion seized them from other HVO soldiers in Prozor and took them to Livno ‘for safekeeping, intending to later return them to their owners’.

The prosecutor continued Andabak’s cross-examination by asking him about conflicts in Gornji Vakuf in January 1993. The trial continues tomorrow.