The defense of former chief of the HVO Military Police Administration Valentin Coric rested its case with the evidence of Zvonko Vidovic. It remains uncertain if the defense of Berislav Pusic, former head of the HVO Commission for exchange, will start its case. The defense of Bruno Stojic announced that Momcilo Mandic would give evidence for him 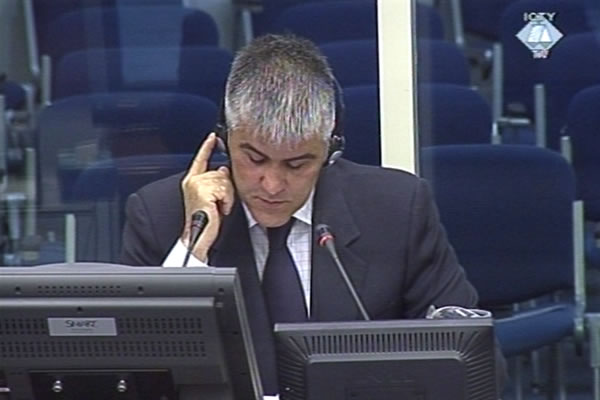 Zvonko Vidovic, defence witness of Valentin Coric
The prosecution continued the cross-examination of former member of the criminal investigations division in the HVO military police, Zvonko Vidovic. The prosecutor brought up evidence corroborating the allegation that the HVO would release from the Heliodrom prison those prisoners who undertook to leave Herceg Bosna and go to ‘third countries’.

‘That was one of the options, but not the rule’, the witness said. Vidovic confirmed that the criminal investigations division was in charge of checking if persons who ‘expressed desire’ to leave Herceg Bosna were criminally prosecuted, denying that only Muslims were checked in this manner. The witness also denied that making the Muslims leave was one of the ways in which the HVO could win the war. As the witness put it, ‘many people left Mostar because of the war, because people were getting killed’.

Prosecutor Kimberly West confronted the witness with a document which quotes him as saying at a meeting that the transfer of prisoners to Heliodrom should stop; they should be sent to Croatia and abroad instead. The witness denied he had said that, claiming that he didn’t take part in facilitating the departure of persons to ‘third countries’.

Coric’s defense rested its case after Zvonko Vidovic completed his evidence. As Coric’s defense counsel Dijana Tomasegovic Tomic explained, this decision was taken after ‘a careful analysis’ of the evidence called by the prosecution and the defense teams of the other accused.

It remains to be seen if the defense of Berislav Pusic, former head of the HVO Commission for the Exchange who is the sixth accused at the trial of former Herceg Bosna officials, will call any evidence. Pusic’s lawyer Fahrudin Ibrisimovic indicated that the first witness would be called at the earliest on 26 April 2010, if at all.

The defense of former Herceg Bosna defense minister Bruno Stojic announced that it would examine one more witness in May: Momcilo Mandic, who served as assistant interior minister in BH before the war. Mandic was to testify in the course of Stojic’s defense case, but his testimony was postponed.