WHAT WAS TUDJMAN’S GOVERNMENT AFRAID OF?

At the trial of the former Herceg Bosna officials, the prosecution continued its cross-examination of General Milivoj Petkovic. The prosecutor alleged that Tudjman’s government was afraid of Petkovic’s evidence in the Blaskic case, knowing that he had quite specific information about Croatia’s involvement in the BH conflict. Petkovic denied this 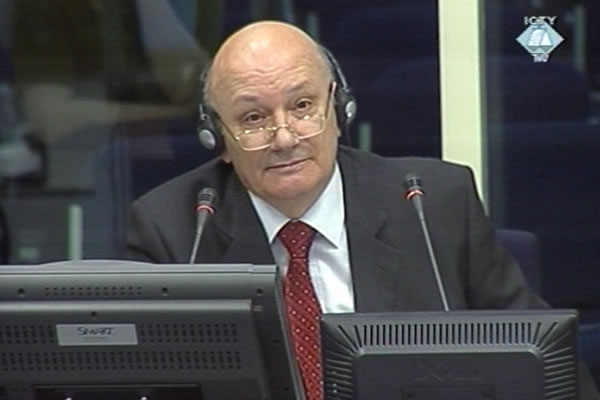 Milivoj Petkovic, witness for his own defence
Continuing the cross-examination of General Milivoj Petkovic, the prosecutor suggested that Petkovic went to BH in April 1992 on the orders of General Janko Bobetko, who was the chief of the HV Main Staff at the time. According to the indictment, Bobetko, the Croatian president Tudjman and defense minister Susak were among the ringleaders of the joint criminal enterprise, implemented in collusion with the Bosnian Croat leaders and aimed at annexing Herceg Bosna to Croatia.

The prosecutor corroborated his claims with Bobetko’s order from April 1992 appointing Petkovic commander of the HV forward command post in Grude. As the prosecutor noted, the defense stated in the summary of Petkovic’s statement that Petkovic left for BH ‘on Bobetko’s orders’. At the time, Bobetko was the commander of the HV southern theatre. Petkovic said that his appointment came after he himself had agreed to go to BH. This is why Petkovic sees himself as a ‘volunteer’.

The prosecutor then put it to Petkovic that Operation South in 1993 was in fact launched by the Croatian Army and not the HVO as Petkovic had previously claimed. The prosecutor corroborated this claim with a report Petkovic and the HV commander Luka Dzanko sent to Bobetko. In their report, Petkovic and Dzanko speak about 400 soldiers of the HV 5th Guards Brigade taking part in the operation. Tudjman’s government knew that Petkovic had this information and that’s why it was afraid of Petkovic’s evidence in the Tihomir Blaskic case.

Along with the 5th Guards Brigade, the prosecutor put to Petkovic, elements of the 7th Guards Brigade and of the 1st and 2nd Guards brigades, Tigers and Thunderbolts, fought side by side with the HVO. The prosecutor emphasized that Davor Marijan, who testified as Bruno Stojic’s expert witness and in the case of Mladen Naletilic Tuta and Vinko Martinovic Stela, confirmed it. ‘I do not accept it’, Petkovic said, claiming that ‘only’ HV members born in Herzegovina and those who ‘volunteered’ to fight against Serbs participated in the operation. Nevertheless, he didn’t ‘check their birth certificates’, Petkovic added.

Replying to the prosecutor, Petkovic explained that the term ‘southern theatre’ – often used in HV documents – referred to the southern part of Croatia and the border area in BH. Petkovic previously confirmed that the Croatian Army would enter the territory along the border pursuant to an agreement between Croatia and BH, to protect its borders against the Serb aggression. The prosecution however contends that in 1993, the HVO and VRS were not enemies but ‘allies’ fighting against their common enemy, the BH Army.