The defense witness called by police general Vlastimir Djordjevic contends that in the spring of 1999, the KLA urged its fellow Albanians to leave Kosovo. At the same time, the Serbian police tried to convince them ‘nicely and politely’ to stay 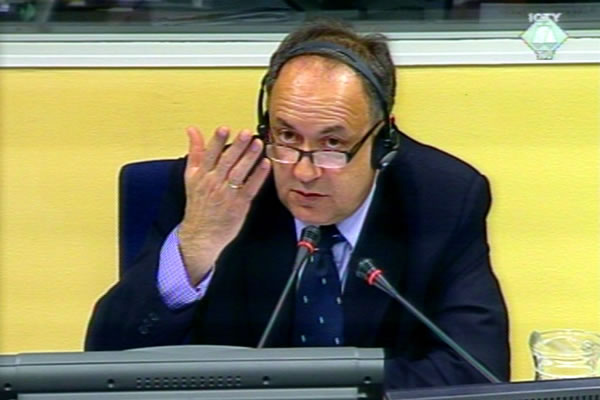 Vukmir Mircic, defence witness of Vlastimir Djordjevic
In the first half of the examination-in chief of Vukmir Mircic, former police chief from municipality of Decani in Kosovo, the defense lawyer representing police general Vlastimir Djordjevic focused on issues the prosecution had dealt with in the case against the three former KLA commanders headed by Ramush Haradinaj. Aleksandar Popovic asked a series of questions about the KLA attacks on civilians and the police; Haradinaj purportedly led those attacks.

Vukmir Mircic explained that the police had operative intelligence that in early 1998 KLA headquarters was located in the village of Glodjani in the Haradinaj family property. Serbs were detained and tortured there, as were Albanians loyal to the Serbian authorities. Mircic said that some of their bodies were found in September 1998 in the Radonjic Lake canal. According to the police reports the defense showed today, the attacks on the police in the Decani municipality occurred most frequently in the village of Prilep on the road from Pec to Djakovica.

The defense then turned to the deportation of Kosovo Albanians in 1999, one of the counts in the indictment against Djordjevic. The witness denied that the police participated in that crime, shifting the blame on the KLA and NATO. Mircic claimed he saw many columns of Albanian refugees moving towards the border. They told him that they were fleeing in fear of NATO air strikes, the witness contended, adding that he tried to convince them ‘nicely and politely’ to stay in their homes but in most cases in vain.

Mircic and his policemen received reports that the KLA urged the Albanian population to flee Kosovo by spreading leaflets and in other ways. Their goal was to create a semblance of a humanitarian disaster that would be broadcast by the foreign media.

Trying to pals down General Djordjevic’s responsibility, the witness said that Djordjevic was not in charge of the Special Police Units’ actions in the province. The PJP units were under the control of the MUP Staff for Kosovo headed by Sreten Lukic. Mircic claimed he saw the accused in Kosovo only once in 1998. He never saw Djordjevic again, not in the spring and not in the summer of 1999, when many crimes were committed against Kosovo Albanians, as alleged in the indictment.

As the hearing drew to a close, the prosecution began cross-examining the witness.