Confronted with numerous allegations about torture of Kosovo Albanians in Serbian prisons in 1998 and 1998, former investigating judge from Kosovo giving evidence in the defense of Vlastimir Djordjevic asked the prosecution not to show ‘only negative examples’. Danica Marinkovic wanted the prosecutor to show ‘something positive’, because it looked as if ‘there was slavery in Kosovo’ 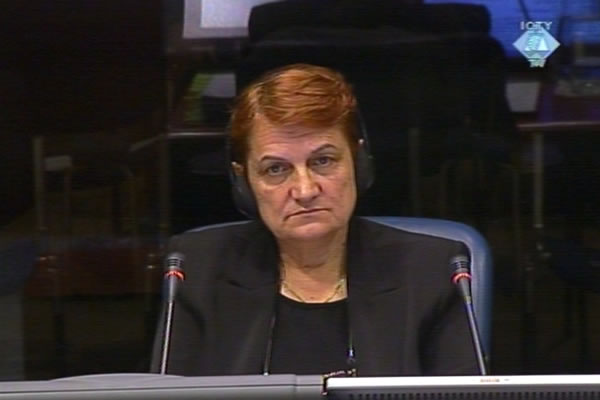 Danica Marinkovic, defence witness of Vlastimir Djordjevic
In the first half of the cross-examination of former investigating judge from Pristina Danica Marinkovic, prosecutor Gopalan tried to prove that in 1998 and 1999 Kosovo Albanian were subjected to severe torture in Serbian prisons, yet the witness didn’t do anything to investigate and prevent it. The prosecution is trying to impeach the witness testifying in the defense of police general Vlastimir Djordjevic. At the same time, the prosecution argues that the detained Albanians confessed under duress that they launched terrorist attack on the army, police and civilians.

In their statements to Human Rights Watch given after their release from prisons in Pristina, Urosevac and other Kosovo towns under the territorial jurisdiction of investigating judge Danica Marinkovic, a large number of Albanians claimed they had been severely beaten and tortured, including the use of electroshocks. The prosecution showed a number of medical reports corroborating those allegations. The witness nevertheless said she was sure there was no unlawful treatment of Albanian detainees and prisoners in Kosovo.

In some cases, the defense lawyers of the detainees who had been beaten up would accuse Danica Marinkovic of delaying the medical examination of their clients until their wounds healed. Destan Rukiqi, a lawyer from Kosovo, was sentenced to 60 days in prison in the summer of 1998 because he told Marinkovic she was ‘acting like a police officer, not a judge’ after she didn’t allow him to look into the file of his client Cen Dugoli. While Rukiqi was in prison, he was severely beaten and ended up with kidney damage. Upon his release from prison, Rukiqi learned that his client Dugoli had died of torture.

Danica Marinkovic replied that all those accusations were ‘insane’. Prisoners and their defense lawyers had to report torture to Serbian judicial bodies, police stations chiefs and prison wardens: precisely those people who beat them up. Asked why she herself didn’t investigate the allegations that reached her, the witness said it ‘was not in the jurisdiction of an investigating judge’.

At one point, the witness complained because the prosecutor was showing her ‘only negative examples’ of how Serbian justice system worked, asking Gopalan to show her ‘something positive’. ‘You only speak about abuse and torture, but we didn’t have slavery’, the witness added.

The incident in the village of Racak was discussed in the second, shorter part of the cross-examination today. More than 40 Albanians were killed on 13 January 1999 there. The prosecution tried to contest to witness’s claim that it was not a massacre but a clash between the police and the terrorists. To corroborate this, the prosecutor showed a video recording where the victims were dressed in civilian clothes and some had gunshot wounds to the face. Danica Marinkovic said she didn’t know if it was blood or ‘red paint’ on their faces, but she did admit that the victims in the footage were civilians. She claimed those were not the bodies she saw in the course of her crime scene investigation on 18 January 1999 in the village of Racak.