The incident in the village of Racak in Kosovo is not listed in the indictment against police general Vlastimir Djordjevic, yet Djordjevic’s defense today tried to prove that KLA members, not civilians, were killed on 15 January 1999 there 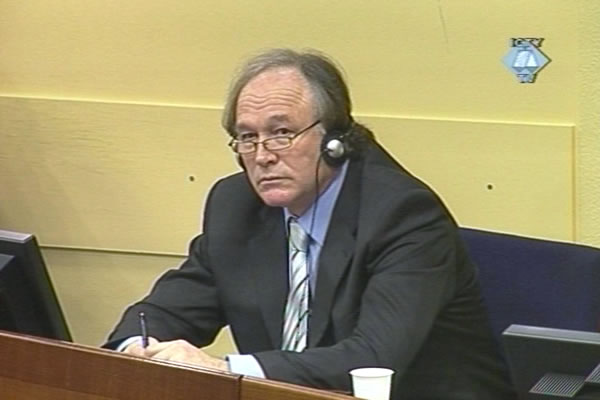 Vlastimir Dordevic in the courtroom of the Tribunal
Former investigating judge from Pristina Danica Marinkovic is the third defense witness to be examined about the incident in the village of Racak, Kosovo. On 15 January 1999, more than 40 Albanians were killed there. It seems that there is a bit of misunderstanding on the issue in the courtroom. The incident is not listed in the indictment and the prosecution mentioned it in its case only to draw attention to the coordinated operation of the army and police on Kosovo. On the other hand, the defense denies that this was a crime, arguing that the victims were not civilians but KLA members.

Danica Marinkovic said today that the Serbian investigating team under her command investigated the crime scene in the village of Racak and concluded that the victims were killed in a clash with the Serbian police. Marinkovic claims that she entered the village together with the public prosecutor on the day of the incident. However, fire was opened on them and the crime scene investigation was interrupted and resumed three days later, on 18 January 1999. On that day, immediately before she left for Racak, the witness met General Vlastimir Djordjevic in the police station in Stimlje. Marinkovic said that Djordjevic ‘enquired’ if it was possible to conduct a crime scene investigation at all.

As the bodies of 40 persons killed in the village of Racak were examined, the witness noted that some of them wore military trousers and belts. Their boots ‘looked like military boots’, the witness pointed.

Bodies were taken to a nearby mosque. Marinkovic contends that the investigation showed there ‘is no evidence of massacre’ and that all the victims were killed from a distance.

Continuing their investigation in the village, the witness and her assistants noted other indicators showing ‘terrorist presence’ in Racak. The witness claims they discovered a house where their headquarters was located, the food storage facility and trenches dug in the forest. According to the witness, this clearly leads to the conclusion that the victims were KLA members and not civilians. She was surprised, Marinkovic said, when she heard that the OSCE Kosovo Verification Mission spoke about ‘a massacre of civilians’ to the media.

After more than six hours of examination-in chief yesterday and today, defense lawyer Dragoljub Djordjevic finally asked the witness a question directly related to the crimes against Kosovo civilians in 1999; his client, former chief of the Serbian MUP Public Security Department, faces those charges. The defense lawyer asked the witness to say whether Serbian courts prosecuted crimes perpetrated by the police in Kosovo. Judge Marinkovic replied that they did, adding that she could not give any names of the accused. The witness could not tell how many cases there had been, saying merely that she knew that indictments were issued and some final judgments were handed down.

In the second half of the hearing, the prosecutor started the cross-examination of the former Pristina investigating judge.