ALBANIANS SAID ONE THING AND MEANT ANOTHER?

In his testimony at the trial of General Djordjevic, former Kosovo policeman Branko Mladenovic contends that in the spring of 1999 Kosovo Albanians told him that they were fleeing the province in fear of NATO and the KLA. The prosecutor put it to Mladenovic that maybe they couldn’t tell him the real reason because he was a policeman, and the police was a reason why they left. The witness replied, ‘I don’t agree with that question’ 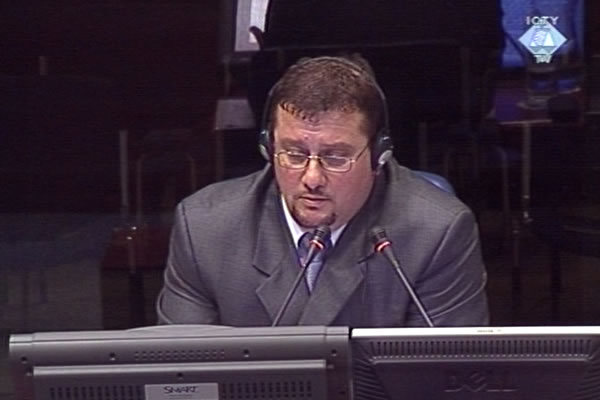 Branko Mladenovic, defence witness of Vlastimir Djordjevic
Former chief of the police station in Stimlje Branko Mladenovic was called to give evidence by the defense of police general Vlastimir Djordjevic. Mladenovic admitted that in 1999 there was a mass exodus of the civilian population from Kosovo. However, Mladenovic claimed that both Serbs and Albanians left Kosovo in fear of NATO and the KLA. The witness thus attempted to contest the crucial allegation in the indictment that there was a joint criminal enterprise aimed at expelling Albanian civilians from the province. As alleged in the indictment, the joint criminal enterprise was headed by the FRY president Slobodan Milosevic. The accused Djordjevic also took part in it, the prosecution contends.

Mladenovic, who is fluent in Albanian language, contends that in the spring of 1999 his Albanian neighbors told him that they were leaving Kosovo in fear of NATO campaign, because of the pressure of Albanian extremists and the possibility of clashes between the KLA and the Serbian security forces. Mladenovic added that Serbs shared their fears. This is why almost all the women and children left Stimlje for Serbia and only men remained to guard their houses.

In the cross-examination, prosecutor Stamp suggested that those Serb men did more than guard their houses; they were drafted into the Reserve Police Squads that took part in military and police actions on Kosovo. Mladenovic admitted that the police armed and controlled some of them. The witness however denied that they were used for anything else but to defend their villages.

Local Serbs from Kosovo are identified in the testimony of a number of survivors as the culprits behind the gravest crimes against Kosovo Albanians in 1999. The prosecution alleges that they were not ‘loose cannon’ but part of the military and/or police units.

The prosecution agrees that the main reason prompting the Albanian civilians to flee Kosovo was fear, but is trying to prove that they didn’t fear NATO or the KLA but the Serbian security forces. The prosecutor put it to the witness that his Albanian neighbors in fact couldn’t tell him the real reason why they fled; Mladenovic was a member of the police, the very force that made them flee Kosovo. Mladenovic tersely replied, ‘I don’t agree with that question’, allowing the possibility that the Albanian refugees told him one thing and later told a different story to the OTP investigators and the international community.