WHAT PERISIC DID IN VRS MAIN STAFF

Defense witness Branko Gajic contends that in July 1995, General Momcilo Perisic visited the VRS Main Staff on General Ratko Mladic’s invitation. Gajic argued that Perisic was to help Mladic in solving a ‘serious problem’ caused by the blockade of the UNPROFOR Ukrainian Battalion 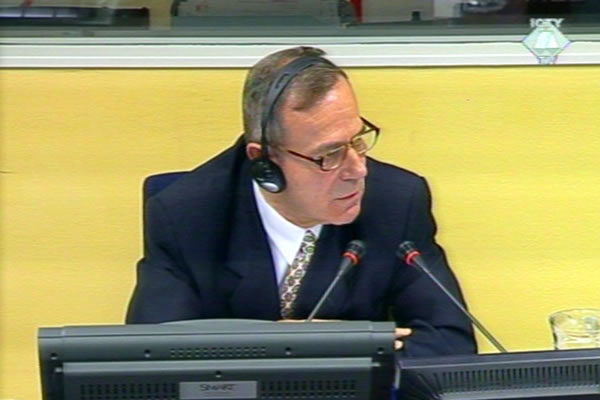 Branko Gajic, defence witness of Momcilo Perisic
According to the evidence of Branko Gajic, former chief of the counter-intelligence department in the VJ Security Administration, General Momcilo Perisic visited the VRS Main Staff in July 1995 to assist in the efforts to deblock a company of the Ukrainian Battalion. As far as Gajic knew, Perisic was invited by General Ratko Mladic to get involved in the effort to solve ‘this serious problem’. Gajic didn’t say if Perisic succeeded in his mission. However, Gajic later read that the company was deblocked.

General Perisic is charged, as the chief of the VJ General Staff, with providing logistic, personnel, financial and other support to the VRS and the VSK, contributing significantly to their crimes in Sarajevo, Srebrenica and Zagreb. The prosecution is trying to prove its claim that the VJ participated in combat operations in BH and Croatia with a document called the Drina Plan, which deals with the joint deployment of the three armies. Gajic, however, claims that he never ‘heard of or saw’ that plan. According to Gajic, the Security Administration had to be involved in the effort to draft a plan for the deployment of the VJ, yet he, as chief of the counter-intelligence department, was not informed about it.

In the cross-examination, Gajic confirmed that the VJ had a defense plan for the protection of Yugoslavia’s territorial integrity. Gajic didn’t disclose the name of the plan in open session because his obligation to keep military secrets confidential has not been waived. According to the prosecution, this plan could have been implemented if the Croatian forces ‘invaded Krajina and Republika Srpska’, and the witness confirmed it. The Drina Plan envisaged the deployment of the VJ outside of the federal state borders.

The prosecution put it to the witness that the VRS depended on the VJ for higher ranking intelligence and security officers. Gajic didn’t agree. The prosecutor showed Gajic documents that, in his view, indicate that Zdravko Tolimir, assistant commander in the VRS Main Staff for intelligence and security, and Ljubisa Beara, military security sector chief, were transferred to the 30th Personnel Centre. The prosecution contends that General Perisic established the 30th and the 40the Personnel Centers specifically for the transfer of the VJ personnel to the VRS and SVK. The witness explained that the two personnel centers only dealt with the officers’ status issues. Once they joined the VRS Main Staff, they were no longer part of the VJ chain of command, the witness argued.