FALSE EVIDENCE ‘IN THE INTEREST OF CROATIA’

In the cross-examination, the prosecution implied that General Milivoj Petkovic lied in his evidence at the trials of Tihomir Blaskic and Darijo Kordic ‘protecting the interests of Croatia’. The prosecution alleges that Petkovic is again lying now as he is testifying in his own defense, corroborating the allegations with a presidential transcript from April 1999. Petkovic denies it all 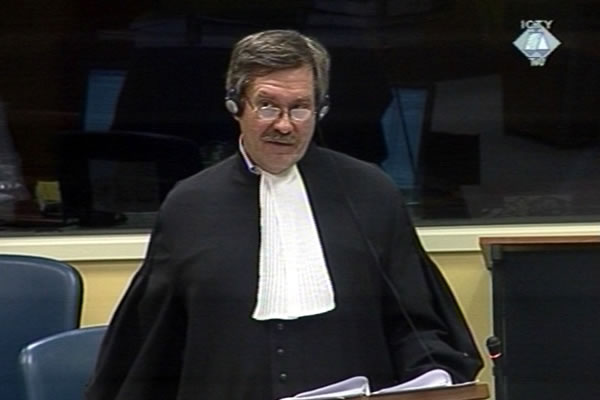 Kenneth Scott, prosecutor at the Ante Gotovina, Ivan Cermak and Mladen Markac trial
In his cross-examination, prosecutor Kenneth Scott put it to Milivoj Petkovic that he ‘protected Croatia’s interests, testifying falsely first in the case of HVO Central Bosnia commander Tihomir Blaskic and later at the trial of BH HDZ president Darijo Kordic’. According to the prosecution, Petkovic is again lying in his evidence in his own defense at the trial of the former Herceg Bosna leaders.

The prosecutor corroborated his claims with the minutes from the meeting between President Franjo Tudjman and a delegation from the Croatian Defense Ministry and the HV Main Staff on 13 April 1999. Defense minister Miljavac told Tudjman that Petkovic had been called to give evidence in The Hague, adding that Petkovic might be asked questions about Croatia’s involvement in the BH conflict. He said he had taken measures to restrict Petkovic’s evidence lest Petkovic should be asked unpleasant questions.

One of the persons at the meeting then suggested to Tudjman that Petkovic’s evidence might be dangerous because during the war Petkovic was in Herceg Bosna together with Mate Boban; Petkovic ‘knew too much’. According to the minutes, Markica Rebic then told Tudjman that the SIS ‘has been in direct contact with Petkovic for three and a half years regarding those things’. Petkovic, he said, was ‘collaborated and assisted’ in preparing Blaskic’s defense. Rebic was chief of the SIS at the time.

Tudjman used the opportunity to say that Petkovic could go to The Hague ‘if he says that there were no Croatian Army troops in the Lasva Valley’. Tudjman suggested that Petkovic’s questions should be arranged in advance. Tudjman was more in favor of not letting any Croatian generals go to The Hague ‘either as the accused or as witnesses’. Tudjman suggested to Rebic and others that this issue should be dealt with by the ‘Hague group’. According to the prosecution, this group prepped Petkovic for his evidence in the Blaskic case.

[IMAGE]4625[/IMAGE]Petkovic replied that the prosecution ‘wants to set him up’. Petkovic denied everything, except the fact that he met with minister Miljavac after he was called to testify in the Blaskic case, after which he travelled to Dubrovnik. Petkovic contends that before he began his evidence he had neither seen nor heard anybody from the Croatian government. ‘Those were all nice fairy tales for Tudjman’, Petkovic commented on the prosecutions allegations about the meeting.

It is interesting to note that yet another detainee from The Hague attended the meeting: General Ante Gotovina intervened to say that the fact that HV soldiers fought in BH could not be concealed; neither could the fact that he himself was commander of the HVO municipal staff in Livno.