In his evidence at the trial of police general Vlastimir Djordjevic, retired VJ colonel Milutin Filipovic said he had carried NATO’s spent depleted uranium rounds from a Pristina suburb to the center ‘with bare hands’. When the prosecutor realized it was not an interpretation error, he remarked that the witness was really a ‘very special man’ because he survived direct contact with radioactive ordnance 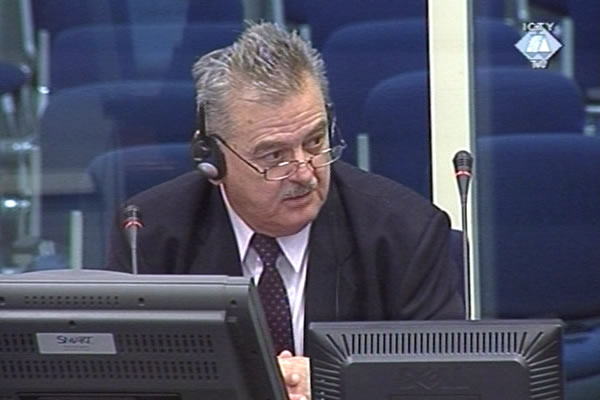 Milutin Filipovic, defence witness of Vlastimir Djordjevic
In the cross-examination of former commander of the Pristina Garrison Milutin Filipovic, the prosecutor contested the witness’s claim about ‘fake exodus’. Filipovic is testifying in Djordjevic’s defense. Two days ago, Filipovic claimed that in the spring of 1999, the Albanians left Pristina, only to double back and return to the town in columns of ‘a circular and semi-circular type’. The aim was to create the impression of a humanitarian disaster.

The witness contended in his examination-in chief that civilians left the province capital not under the pressure of the army and the police, but in fear of NATO air strikes and ‘terrorist’ activities. This prompted the prosecutor to note that it was difficult to come to terms with the ‘fake exodus’ theory. When he was asked if the exodus had been ‘fake or real’, Filipovic said that it was a ‘synchronized process’: some fled the town in fear of air strikes while at the same time others roamed the town as the bombs fell and then went to their homes.

The prosecutor reacted to Filipovic’s claim that depleted uranium ordnance was the key factor that made the people leave Pristina. Speaking about the dangerous radioactive ordnance two days ago, Filipovic recounted how he had carried ‘with bare hands’ parts of the rounds from a Pristina suburb to the center. As the witness put it, he staged a ‘little exhibition’ for the people, to show them what NATO had used. ‘Is that what you have said or is it an interpretation error’, asked the prosecutor today. If Filipovic’s words had been interpreted correctly, the prosecutor said, then that would have made him a ‘really special man’, able to survive direct contact with depleted uranium ordnance. The witness replied coolly that he had really done that, adding that there were witnesses to corroborate his claims. It was ‘well-known’ that radioactive ordnance was used in the NATO air strikes, the witness said, and there was no need to prove it.

In his examination-in chief, Filipovic claimed that the Albanians decided to leave Pristina not only because of NATO air strikes, but because of the KLA propaganda: the KLA distributed leaflets urging the population to move to Macedonia and Albania. The prosecution, on the other hand, implied that the controversial leaflet was part of the Serbian authorities’ propaganda. The prosecution brought up a number of grammatical errors in the Albanian text, and the fact that the leaflet was purportedly signed by Kosovo president Ibrahim Rugova. At that time, Rugova didn’t want to work with the KLA. The witness replied he couldn’t help the court with linguistic errors, and added that he didn’t want to make ‘an in-depth analysis’ of the relations between Albanian military and political fractions. He merely remarked that they all shared the same goal – Kosovo’s secession.

The trial of Vlastimir Djordjevic for the murder and deportation of Albanians from Kosovo in 1999 continues on Monday, with the evidence of a new witness.