Retired VJ colonel Milutin Filipovic claims he saw ‘fake exodus’ in Pristina during the NATO campaign in 1999: columns of ‘circular and semi-circular type’ in which Albanian civilians left the town only to return to their point of origin 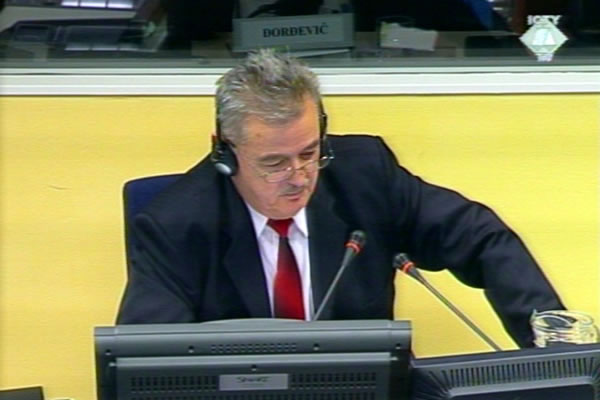 Milutin Filipovic, defence witness of Vlastimir Djordjevic
Vlastimir Djordjevic’s defense continues to deny that the accused Serbian MUP general was responsible for the murder and deportation of Kosovo Albanians in 1999; according to the defense, those crimes were not committed at all.

Djordjevic’s defense case continued with the evidence of former commander of the Pristina Garrison, Milutin Filipovic, who accused the NATO and the KLA for the evacuation of civilians from Kosovo. Filipovic maintained that he had talked to many Serbs and Albanians who had left Pristina on the eve of the NATO campaign and during the air strikes. All of them told Filipovic that they had left in fear from air strikes and escalating ‘terrorist’ attacks.

This is Filipovic’s second appearance before the Tribunal. In November 2007, the defense called Filipovic to give evidence at the Kosovo Six trial. The transcript of his testimony was tendered by Djordjevic’s defense and admitted into evidence. Today the witness repeated the most exotic parts of his previous testimony.

The retired VJ colonel thus contends that in 1999 the KLA distributed leaflets throughout Pristina, urging the Albanians to flee across the border or to move to other parts of the province. Filipovic claims that he visited a refugee group that took shelter near Pristina. They told Filipovic that ‘terrorists’ had forced them to leave, promising they would be well taken care of and given food. Since this wasn’t the case, it was easy to convince them to return to their homes, Filipovic said.

The witness also noted a phenomenon in Pristina he called ‘fake exodus’. Those were, as he explained, columns of ‘circular and semi-circular type’ of Albanian civilians which would leave the town only to return immediately back to their point of origin. According to Filipovic, the people circling around the town could deceive an ‘ordinary observer’ to believe that this was a real exodus.

Noting that the people were in fear of NATO air strikes, the witness said that the people were in particular afraid of depleted uranium ordnance. Filipovic claims he personally saw such bombs and carried them ‘in his bare hands’ from a Pristina suburb to the center. Filipovic left the bombs on display there so that everybody could see what NATO had used. Since Filipovic himself spoke about the lethal effects of such weapons, many would call his actions brave, but he himself said modestly that he had merely been ‘rash’.

The prosecution will cross-examine the witness tomorrow.