‘SOME ALLEGED CRIMES AGAINST SOME CIVILIANS’

Retired VJ general Milos Djosan is testifying in the defense of former chief of Serbian MUP Public Security Department Vlastimir Djordjevic. Djosan says he never received reports about the police role in the murder of 20 Albanian women and children in the Milos Gilic Street in Djakovica in April 1992. Djosan couldn’t confirm that the crime actually did happen 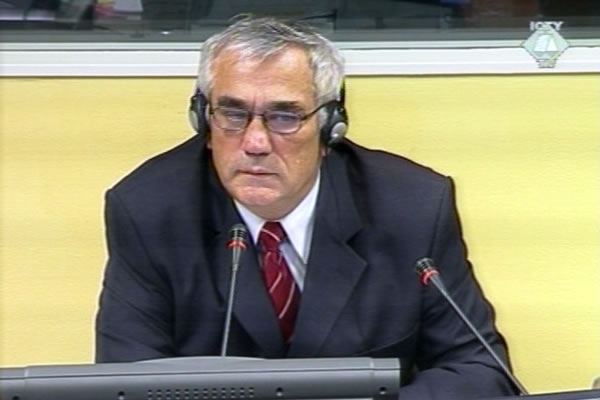 Milos Djosan, defence witness of Vlastimir Djordjevic
In his cross-examination today, retired VJ general Milos Djosan persistently denied that the Serbian army and police had any part in the murder and deportation of Kosovo Albanians in 1999. Police general Vlastimir Djordjevic is on trial for those crimes. Djosan in fact tried hard to deny that the crimes were committed at all. Prosecutor Kravetz confronted Djosan with the evidence of eyewitnesses who survived the incidents in which Albanian civilians were killed and their homes torched. He was prepared only to admit that those were ‘alleged crimes’.

Although in the period relevant for the indictment, Djosan was commander of the VJ 52nd Artillery Brigade and the Djakovica Garrison, he tried to leave the impression that he was not well-informed about the events in his zone of responsibility.

Djosan claimed he didn’t have much information about Operation Reka in the Caragoj Valley. Elements of Djosan’s brigade participated there in late April 1999. Djosan heard nothing about the crimes perpetrated against the local Albanians at the time. He didn’t even know which units fought side by side with soldiers subordinate to him, he claimed. Djosan thus couldn’t – or didn’t want – to tell if the police units under the command of the accused took part in the action. The indictment against Djordjevic alleges that the entire Albanian population was expelled from the Caragoj Valley during Operation Reka. Several hundred civilians from the villages of Korenica and Meja were killed.

The witness also said that he ‘could hardly remember’ what happened in the Milos Gilic Street in Djakovica in early April 1999, adding that he only heard about ‘an alleged crime against some civilians and that some houses were burned down’. In the indictment against Djordjevic, the incident was described as the murder of 20 women and children in the basement of a house which was then burned down.

‘I claim with certainty that my units didn’t commit this alleged crime’, Djosan was adamant. The prosecutor argued that the crime was real and not ‘alleged’, but never contended that the army had taken part in it. According to the prosecution, the police are responsible for the massacre. The witness was not able either to deny or to confirm, because he claimed he had never received any reports.

One of the rare things Djosan was certain about is the fact that the Albanians didn’t leave Kosovo en masse in fear of the army and the police: they did it because they were afraid of the NATO strikes, particularly of depleted uranium ordnance. Djosan said that rumors were rife in Djakovica at the time that those bombs could cause male infertility. People fled because ‘they were worried about their posterity’. The prosecutor noted that according to Djosan, largest-scale departures were reported in early April 1999. The prosecutor contrasted this with the statement by General Slobodan Petkovic who testified for the defense earlier, who said that first evidence that depleted uranium ordnance was used was discovered in late April 1999. Djosan briefly replied that he didn’t agree with Petkovic. ‘Fear of infertility’ was just one of the reasons people left Kosovo: the KLA also pressured the Albanian civilians, Djosan said.