In the cross-examination of Milivoj Petkovic the prosecution contends that the former chief of the HVO Main Staff was not ‘an apolitical military technocrat’; Petkovic was an important political figure in Herceg Bosna. The accused rejected this claim saying that Boban, Prlic and Stojic made political decisions. Defense was the main political goal of the HVO, Petkovic added 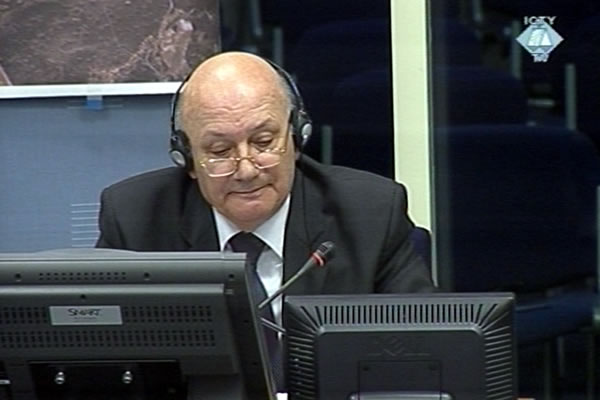 Milivoj Petkovic, witness for his own defence
At the trial of the six former Bosnian Croat leaders, the prosecution argued that General Milivoj Petkovic was not ‘an apolitical military technocrat’ when he served as the chief of the HVO Main Staff. According to the prosecution, Petkovic was an important political figure in the Croatian Community, later the Republic of Herceg Bosna.

‘I was not a politician, I was a regular soldier’, Petkovic replied, claiming that policies were conceived by others. According to Petkovic, the ‘others’ were the HZ HB president Mate Boban, prime minister Jadranko Prlic and head of the HVO Defense Department Bruno Stojic.

Speaking of his military role, Petkovic explained that he was answerable for operational issues to Boban, who was the supreme commander of the armed forces. For all other issues, Petkovic’s superior was his co-accused Bruno Stojic. Petkovic didn’t contest the fact that he attended meetings of the HZ HB presidency and government on several occasions. However, Petkovic explained that at the meetings he ‘merely submitted reports on the military and security situation’ as this was his duty.

‘This means that you report and the government gives you instructions’, the prosecutor said. Petkovic confirmed this, adding that he and the Main Staff received instructions via the Defense Department. Petkovic’s testimony about the important political role of his co-accused Prlic and Stojic was later augmented by Petkovic’s claim that the main political goal of the HVO was defense.

Petkovic was ‘surprised’ when the prosecutor showed him his interview in December 1994 to the Glas Slavonije newspaper. In the interview, Petkovic says that as the chief of the HVO Main Staff he felt ‘more like a politician than soldier’. When the prosecutor showed him other documents which implied that Petkovic played an important role in controlling the access of the media and the international organizations to the information on the HVO operations, Petkovic explained that the military information was confidential.

As of yesterday, the man who succeeded Petkovic’s successor as the chief of HVO Main Staff, Slobodan Praljak is no longer in the courtroom because he was unhappy with the decision of judges Trechsel and Prandler, who outvoted the presiding judge Antonetti and refused to admit into evidence some documents submitted by Praljak’s defense. In a lengthy letter to the judges, Praljak argued that the decision harmed both his defense and the defense of the others accused. ‘It is all I can do, say my piece and save my soul and you do what you will’, Praljak concluded.