In his replies to the judges, former chief of the HVO Main Staff Milivoj Petkovic gave his impressions from the meetings with Tudjman and Susak and about the Croatian Army role in the BH war. Mladen Naletilic Tuta called Petkovic ‘Tito’s soldier’ and threatened he would kill him, Petkovic recounted 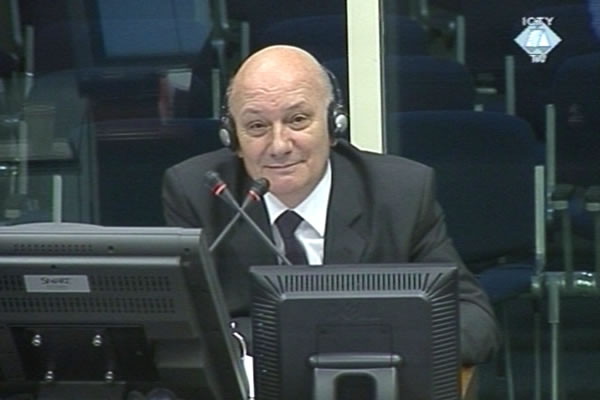 Milivoj Petkovic, witness for his own defence
Former chief of the HVO Main Staff Milivoj Petkovic continues his evidence in his own defense. Today he described how and when he met Tudjman and other civilian and military officials from Croatia and Herceg Bosna. As alleged in the indictment against the six former Herceg Bosna leaders, those officials headed the joint criminal enterprise aimed at annexing parts of BH to neighboring Croatia.

Petkovic met former Croatian president Tudjman and defense minister Susak for the first time at the negotiations in Geneva in January 1993, he said. He had not spoken to either of them before. Petkovic met former commander of the Croatian Army Main Staff Janko Bobetko immediately before his arrival in BH, in mid-April 1992.

According to Petkovic, he met Mate Boban in March 1992. The former president of the Croatian Community Herceg Bosna wanted to know if the Croatian Army planned to do something about the Serbian offensive against Livno and Tomislavgrad. The offensive was a threat to the Croatian territory south of Split. It took three attempts by Boban to finally get Bobetko to order the establishment of the forward command post in Grude.

According to Petkovic, the HV elements withdrew from the border areas of BH to Croatia in September 1992. As of that time, the command over the troops in Herceg Bosna belonged to the HVO Main Staff, headed by the accused Petkovic. He claims that the HV didn’t take part in the fighting in Prozor in October 1992. At the time, the HV was busy dealing with the JNA’s pull-out from southern Croatia and liberating that territory.

Petkovic would run into Jadranko Prlic mostly at the government sessions, he said. According to Petkovic, the government was actually ‘a temporary executive body’. The government decisions were implemented through the Defense Department and the Main Staff, and the supreme commander of the armed forces, Mate Boban. ‘Neither Prlic nor former Herceg Bosna defense minister Bruno Stojic issued operational orders’, said Petkovic, adding that there was no need for something like that as there ‘were no operations’, except in 1992.

Petkovic depicted Valentin Coric, former chief of the Military Police Administration, also an accused in this case, as a ‘quiet and calm man’, quite unlike Slobodan Praljak who was ‘more explosive’. Praljak succeeded Petkovic as the chief of the HVO Main Staff on 24 July 1993. Petkovic met Berislav Pusic, former head of the Office for Displaced Persons and Refugees, only once in early May 1993 in Jablanica. Petkovic ‘hardly recognized’ Pusic on his arrival in the Tribunal’s Detention Unit.

Petkovic reserved harshest criticism for the former commander of the Convicts’ Battalion, Mladen Naletilic Tuta. As of 14 November 1992, Petkovic claimed, Tuta was subordinated only to Mate Boban. On that day, angry because he had lost two of his soldiers in Operation Bura, Tuta stormed into Petkovic’s office and called him ‘Tito’s soldier’, threatening he would kill him. From that day on, Petkovic noted, Tuta was no longer under the control of the HVO Main Staff: he ‘was under Boban’s protection’.