DID VJ COOPERATE WITH THE KOSOVO VERIFICATION MISSION? 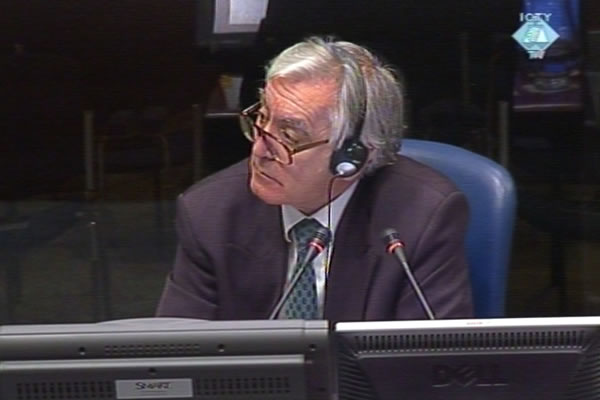 Kosta Novakovic, defence witness of Vlastimir Djordjevic
The defense of police general Vlastimir Djordjevic today tried to contest the prosecution claim that the Serbian security forces didn’t comply with their obligation to withdraw part of the personnel and weapons from Kosovo in late 1998, by calling retired VJ colonel Kosta Novakovic to the witness stand. At that time, Novakovic was a member of the General Staff Commission for Cooperation with International Observer Missions. In this capacity, he attended meetings with high ranking representatives of the OSCE Kosovo Verification Mission.

Vlastimir Djordjevic was among the signatories of the agreement establishing the OSCE mission in Kosovo in October 1998. Former chief of the Serbian MUP Public Security Department is now on trial for crimes against Kosovo Albanians during the NATO campaign in the Federal Republic of Yugoslavia.

Novakovic claims that the cooperation with foreign observer missions went on very well. There were minor problems with the Kosovo Verification Mission members who didn’t comply with the agreement. As Novakovic clarified, some verifiers demanded to enter the border area without VJ approval and do checks inside military facilities. The army didn’t agree to that.

The witness criticized the OSCE because 90 percent of the observers in what was to be a civilian observer mission were in fact military officers. Implying that the Kosovo Verification Mission actually funneled intelligence to NATO, Novakovic said that when the campaign was launched, the air defense systems were the first targets. The Kosovo Verification Mission observers had previously inspected those systems.

In the cross-examination, prosecutor Kravetz put it to the witness that the crucial problem the Kosovo Verification Mission faced was lack of cooperation on the part of the Serbian military representatives. The prosecutor noted that the Kosovo Verification Mission leadership constantly complained about the army refusing to provide data about the troop strength and quantity of weapons in the province. Under the agreement, the army was obliged to do it. Novakovic stressed he was sure that the army had provided all the requested data, allowing the possibility that there might have been ‘minor’ misunderstandings with the KVM representatives.

This is the second time Novakovic is testifying before the Tribunal. He testified at the trial of three Croatian generals accused of crimes against Serbs during and after Operation Storm as General Ante Gotovina’s defense witness.