DID PAVKOVIC WRITE TO HIMSELF?

Police general Vlastimir Djordjevic’s defense contests the authenticity of a letter sent by General Pavkovic to chief of General Staff Ojdanic. In the letter, Pavkovic informs Ojdanic of the police crimes on Kosovo. The defense suggested that the letter was logged at a later date, after Pavkovic succeeded Ojdanic. If that is indeed the case, then the 3rd Army commander wrote the letter to himself, in an effort to avoid prosecution for Kosovo crimes 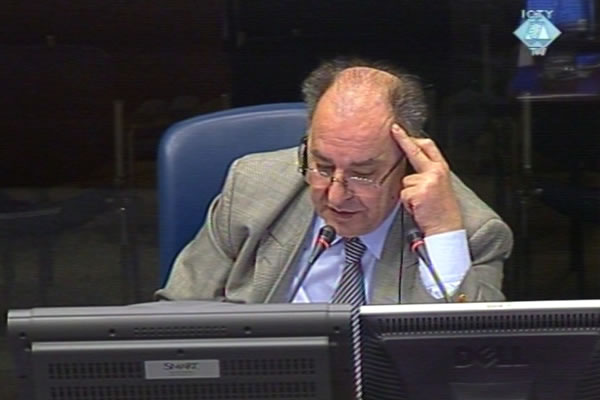 Milan Radoicic, defence witness of Vlastimir Djordjevic
Among documents admitted into evidence at the trial of police general Vlastimir Djordjevic is a letter written by the 3rd Army commander Nebojsa Pavkovic on 25 May 1999. In the letter, Pavkovic informs Dragoljub Ojdanic, chief of the VJ General Staff, of crimes committed by the police against Kosovo Albanians. Following in the footsteps of Ojdanic’s defense at the Kosovo Six trial, Djordjevic’s defense today challenged the authenticity of that document, in an effort to prove that it was logged at a later date and irregularly.

Pavkovic himself gave the document to the prosecution in 2002 when the investigators interviewed him as a suspect. The controversial letter didn’t help Pavkovic much, in light of the Kosovo Six judgment last year. Pavkovic was sentenced to 22 years. On the other hand, it didn’t harm Ojdanic, either, as he was sentenced to 15 years.

Djordjevic’s defense doesn’t want to risk it, because the letter openly speaks about the police crimes at the time when it was under the control of the accused. This is why the defense called Milan Radoicic, former chief of Ojdanic’s office, to the witness stand. Radoicic for the most part repeated what he had stated in September 2007 in his testimony in Ojdanic’s defense at the Kosovo Six trial: that while he served in the General Staff, the letter didn’t reach the office of the chief of General staff. Radoicic also said it was illogical that the document in was logged both in the General Staff’s logbook and the military archives. As Radoicic put it, somebody ‘malicious or incompetent’ did that at a later date.

In the cross-examination, prosecutor Petersen showed Pavkovic’s letter, telling Radoicic that the General Staff stamp was clearly visible on it. The stamp confirmed that the document was logged in Ojdanic’s office. Radoicic agreed that the stamp was authentic, noting that nobody could tell if it was affixed in 1999 or later, when Pavkovic was chief of the General Staff.

The prosecutor then showed the witness a General Staff logbook which clearly shows that the letter was logged there. Radoicic said that he, as a ‘deformed professional with an overdeveloped perception’, was able to determine the ink colors of the two entries were different. Radoicic also claimed that Pavkovic’s report was logged among unrelated documents. ‘It is as if you were to sell vegetables in a jewelry shop’, the witness concluded.