In his evidence at the trial of Bosnian Serb police leaders, former BH deputy interior minister Vitomir Zepinic said that he regretted that MUP hadn’t arrested all the leaders of nationalist parties, as that would have allowed the people to opt for peace instead of war 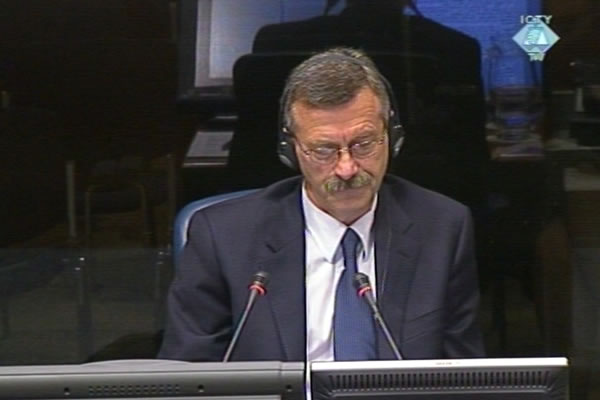 Vitomir Zepinic, witness at the Mico Stanisic and Stojan Zupljanin trial
The last deputy interior minister in the pre-war BH, Vitomir Zepinic said that he ‘regretted’ that MUP hadn’t arrested the entire BH government, presidency and assembly in early 1992. This, Zepinic clarified, would allow the people to ‘vote for life instead of the war offered by the political leaders’ at the elections. Zepinic said this as he gave his evidence at the trial of Mico Stanisic and Stojan Zupljanin, former officials of the Bosnian Serb police.

In his cross-examination, Zepinic agreed with the defense of the former chief of the Banja Luka Security Services Center Stojan Zupljanin that the war in Croatia in 1991 racked up the tensions in that area. Zepinic also confirmed that the accused Zupljanin regularly informed him about the incidents in the field. The witness added that he would have liked the accused to have ‘kept him even better informed’, noting that it was only at this trial that he learned about the instances when Zupljanin ‘skipped’ the MUP chain of command and communicated directly with the SDS leadership.

In his examination-in chief, Zepinic said that in early April 1992 Mico Stanisic ‘waved a gun’ at him, threatening to kill him. This, Zepinic recounted, happened at a meeting of the Serbian Democratic Party leadership when Zepinic was forced to resign. The defense of the first Bosnian Serb police minister Mico Stanisic said this was ‘the witness’s interpretation’ of the events, putting it to the witness that his claim was contradictory: Zepinic had previously said that according to the rules no one could enter the Presidency building with a weapon. This, the defense implied, meant that Stanisic could not have attended the meeting with a gun. The witness remained adamant about Stanisic’s threats, adding that he, Zepinic, suggested that the two of them should go to basement. That way, if Stanisic really wanted to kill Zepinic he would not have to do it in Krajisnik’s office.

The defense went on to argue that Zepinic worked for the Republika Srpska Military Security, and was not actually incarcerated from September to November 1992 as he had claimed in his examination-in chief. Zepinic testified that Stanisic personally arrested him in Belgrade and took him to a prison on Pale. Zepinic denied any connections with the military security service. On one occasion in prison he was given a uniform, Zepinic recounted and was escorted by the warden to Grbavica to find and take out a Muslim, who was the chief in the Yugoslav SUP. When the task was completed, Zepinic said, he was taken back to his cell in the military prison in Pale. The defense didn’t ask the witness any more questions about his arrest in Belgrade.

When he completed his evidence, the witness addressed the Tribunal, asking it to assist, through its efforts, the recovery of his ‘former country’, noting that ‘every eighteenth man was killed, 40 percent of the population expelled and 750,000 inhabitants need professional help for post-traumatic stress’. ‘Help get the smile back on the faces of the children in my country’, Zepinic concluded his address to the Trial Chamber.