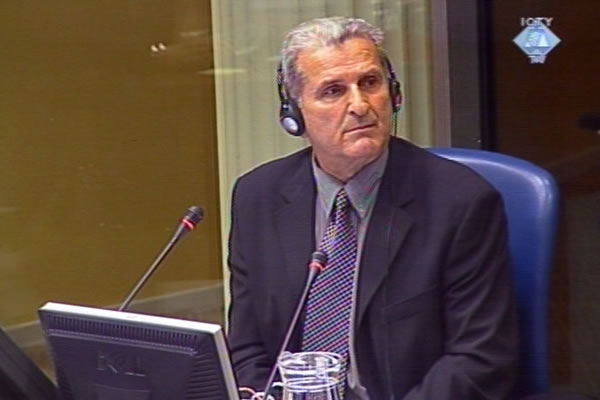 Speaking about the minister’s order issued to the CSB in mid-August 1992, the witness confirmed that crimes against the Serbs in the territory covered by his CBS were investigated. In his order, the minister emphasized the need to investigate and document war crimes. The witness said that he didn’t know for sure if the crimes against Croats and Muslims were investigated. Nevertheless, the witness ‘thought’ he was told about such investigations ‘in off-record conversations’. Despite lack of direct knowledge, the witness added, he was ‘sure’ that his colleagues as ‘professionals’ investigated and prosecuted those crimes too. Borovcanin claims that he ‘never heard’ about any crimes committed by the special police against Croats and Muslims.

A report of the Pale Public Security Station of 7 August 1992, shown by the prosecutor, says there were no prisoners of war under the jurisdiction of that station, apart from those ‘detained and remanded in custody by the police’. The witness repeated that the term prisoner related to the Bosniak refugees who asked for police protection because they could fall victim to various paramilitary groups. The prosecutor called this interpretation ‘if pigs could fly’ theory.

The same report says that in the territory covered by the Pale station ‘there are no paramilitary formations; nor have there been any’. The prosecutor described it as a ‘lie and not a mistake’, in light of the previous report about Arkan’s men staying in the Panorama Hotel at Pale. The witness admitted that he was ‘indeed surprised’ by the report: ‘it was very busy and everybody and his uncle Abner would come’ to Pale. The witness also confirmed that Arkan’s men really did stay in the Panorama Hotel. At the time, the RS Government and Radovan Karadzic also had their offices there.

Mico Stanisic’s lawyer again spoke about the ‘marginalization’ of the Serb personnel on the level of the Republic by Muslims and Croats in the Ministry. The defense had done so before with previous witnesses, former employees of the BH MUP who transferred to the RS MUP. The witness agreed with the defense. After the Serb MUP was established, the Serb police officers continued to be pushed aside, the witness noted, this time by the local authorities who acted as ‘states within little states’, as Borovcanin put it. The defense argues that in 1992, local crisis staffs influenced more powerfully the police than Stanisic who was the first interior minister. The witness also agreed that Mico Stanisic worked on creating a professional service. With an apology for the accused, the witness said that Stanisic often ‘bugged’ his employees with memos to the Security Services Centers, reminding them of the need to comply with professional standards in police work.