PROFESSIONALISM AS A CONSPIRACY AGAINST SERBIA 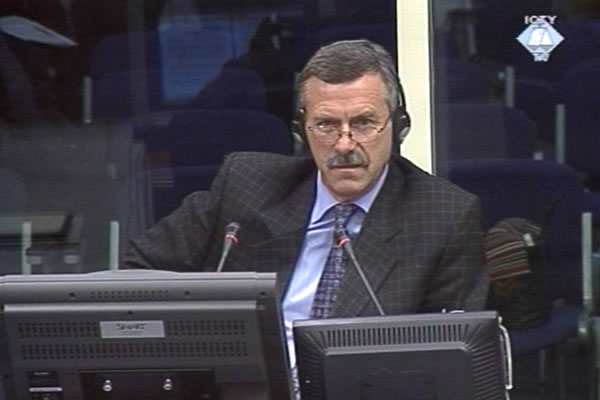 Vitomir Zepinic, witness at the Mico Stanisic and Stojan Zupljanin trial
Vitomir Zepinic, the last deputy interior minister in the Socialist Republic of Bosnia Herzegovina, began his evidence on the political situation in the Ministry immediately before the war broke out in 1992. In his evidence at the trial of former Bosnian Serb MUP officials Mico Stanisic and Stojan Zupljanin, Zepinic identified the voices and analyzed the contents of intercepted telephone conversations of the accused and Serb political leadership in 1991.

The witness was appointed deputy interior minister in early 1991 on the recommendation of the Serbian Democratic Party. Zepinic was never in the SDS. He and the minister, Bosniak Alija Delimustafic, were nicknamed ‘Boro and Ramiz’ by the media because of their efforts to keep BH as a united and multi-ethnic country. Boro, a Serb, and Ramiz, an Albanian, are symbols of inter-ethnic friendship from World War II, a metaphor for brotherhood and unity. When asked about his ethnic background, Zepinic said he was Australian, because he has lived there since the mid-90’s, adding that he used to declare himself as a Yugoslav.

In his meetings with Radovan Karadzic, Zepinic espoused diametrically opposed views about the possibility of the coexistence of three nations in BH, he recounted today. Karadzic insisted on ‘the stories from the past’, from World War II, and emphasized that the unity of the three ethnic groups was not possible. To the best of Zepinic’s recollection, the accused Stanisic didn’t say publicly that the coexistence was impossible, but he insisted that Serbs had been ‘pushed aside’ in the Ministry and other institutions. Zepinic said he had known Stanisic before the war. The accused was a member of a judo club, while Zepinic was the chairman of the karate federation.

Analyzing the transcripts of intercepted telephone conversations shown by the prosecution, Zepinic noted that the political leaders of the nationalist parties put pressure on the MUP to get the personnel to take political sides and to replace professionals with employees loyal to the parties. Zepinic opposed this. Today Zepinic claimed he had never seen a letter from the accused Stojan Zupljanin to Biljana Plavsic in July 1991. The letter speaks about a ‘Muslim conspiracy’ in the MUP. According to Zepinic, the letter was ‘inappropriate’. If he had known about Zupljanin’s direct contact with the Presidency, skipping the Ministry leadership, Zepinic would surely had disciplined Zupljanin and asked for his dismissal.