HOW CRIMINALS BECAME PART OF THE POLICE 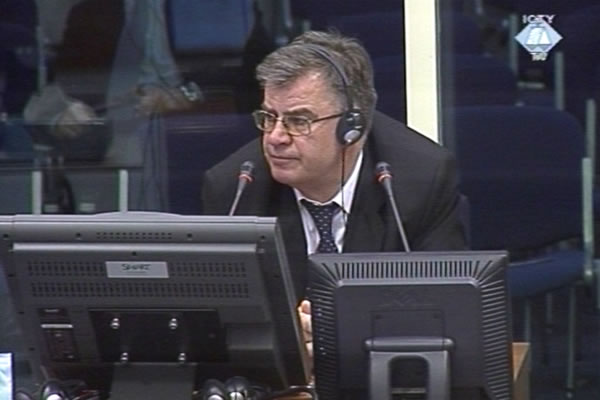 Tutus is an unwilling witness of the prosecution. He came to The Hague because he received a subpoena to testify. He said that in April 1992 members of the so-called Serbian Defense Forces (SOS) took over all key institutions in Banja Luka. The people from the local authorities, including the accused Stojan Zupljanin, negotiated with those forces. The witness said he was ‘surprised’ when a decision was made to place the SOS under the jurisdiction of the Security Services Center because some SOS members were convicted felons. Zupljanin headed the Security Services Center at the time.

Prosecutor Korner showed the witness a number of documents he had handed over to the OTP investigators during the interviews in 2004, including a number of complaints addressed to Zupljanin because of ‘the arrogant and impermissible’ behavior by the CSB special unit. The witness now contends that it was not his duty to verify if Zupljanin responded to the complaints by initiating disciplinary or criminal proceedings against the members of the special unit he and other SJB staff complained about.

One report describing the behavior of the special police unit describes an incident that happened on 21 July 1992: the special unit attacked a district prison, disarming the guards and liberating two of their colleagues who were in custody because they had committed serious crimes. Tutus confirmed that Zupljanin phoned him after the arrest telling him to ‘consider’ the possibility of releasing the special unit members. Zupljanin explained that there was ‘tension’ in the unit and ‘danger’ that the unit members might withdraw from the separation line. Tutus claims he said to Zupljanin that it would be illegal, adding that only a court could reach such decision. Tutus instructed Zupljanin to request their release in writing.

After the conversation, Zupljanin sent a memo to Tutus stating that the arrested members of the special unit ‘must be released’ and instructed to report to the SJB to continue their work ‘if necessary’. The witness described today Zupljanin’s memo as a ‘request’, not an order. In his statement to the OTP investigators in 2004 the witness said that Zupljanin usually talk in a way ‘that made everything he orders law’. Today the witness said that the accused ‘was not a man who used harsh words’ and ‘was known to say serious things in a soft voice’.

The defense teams representing Zupljanin and Stanisic will cross-examine Tutus on Thursday. Stanisic and Zupljanin are charged with crimes of the Bosnian Serb police in 1992.