Slobodan Petkovic, former chief of the Department for Atomic, Chemical and Biological Weapons in the VJ, claimed at the Kosovo Six trial that the NATO campaign ‘could have influenced’ the migrations of Kosovo Albanians in 1999. Today, two years later, at the trial of General Vlastimir Djordjevic, Petkovic said that the air strikes were ‘certainly’ a reason why the population left 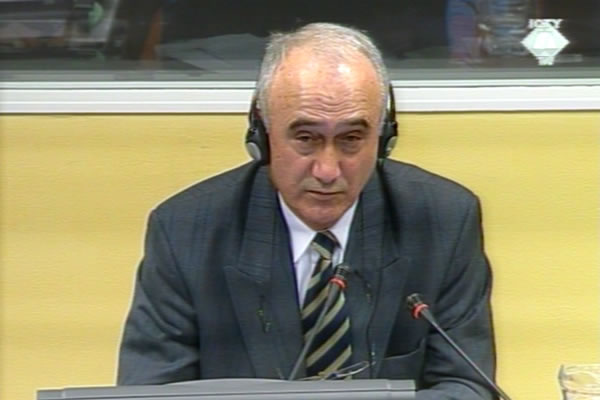 Slobodan Petkovic, defence witness of Vlastimir Djordjevic
The defense of the former Serbian MUP Public Security Department chief Vlastimir Djordjevic today tried to contest the allegation that the Albanian population fled Kosovo 1999 under military and police pressure. The defense tried to blame NATO for the emigration: according to Djordjevic’s lawyers, civilians fled in fear of air strikes. Slobodan Petkovic, former chief of the Department for Atomic, Chemical and Biological Weapons in the VJ General Staff was called to testify to support this argument. Petkovic already testified about that at the trial of the Kosovo Six. The transcript of his testimony from September 2007 was admitted into evidence today.

General Petkovic contends that 60 percent of the targets of the NATO campaign in Serbia and Kosovo were civilian. Cluster bombs and depleted uranium ammunition were used, Petkovic added. In his previous evidence before the Tribunal Petkovic argued this ‘could have influenced’ the migrations of Kosovo Albanians. Today Petkovic said he was ‘certain’ that air strikes influenced movements of population. ‘This surely was one of the reasons and you will establish if there were other reasons too’, the witness said to the Trial Chamber with Judge Parker presiding.

In the cross-examination, prosecutor Petersen highlighted the paradox in Petkovic’s evidence: Petkovic claims that southern and southwestern parts of Kosovo were most heavily hit by air strikes, and at the same time, he says that the Albanian civilians fled towards Albania and Macedonia through that area. In order to understand their actions, the witness said, ‘one should get into the mindset of those people’. The witness added that civilians were so scared that they decided to run the risk and pass through the territory exposed to the fiercest air attacks.

The witness argued that Belgrade was also targeted by fierce and frequent NATO strikes. This prompted the prosecutor to ask the witness if the migration of the people out of the capital was as intense as that on Kosovo. ‘There was no mass emigration but individuals did leave’, Petkovic replied. Petkovic added that NATO strikes on Belgrade were not as massive as those on Kosovo.

The witness dissected in much detail the behavior of NATO in 1999. Judge Parker was prompted to warn the defense not to stray too far from the subject of the trial. Noting that the Trial Chamber was aware the defense was trying to prove that NATO strikes influenced the behavior of the accused, Judge Parker reminded his lawyers that Djordjevic didn’t face any charges related to the NATO air strikes. The Trial Chamber admitted the witness’s statement into evidence, but not in full: parts the Chamber considers either irrelevant or matters of expert opinion were deleted, because Petkovic was not called to give evidence as expert. The trial of General Vlastimir Djordjevic continues on Monday with the evidence of former chief of the VJ General Staff Branko Krga.