CIVILIANS WERE ARMED BECAUSE OF DIRE NEED, NOT A WHIM

In his cross-examination, police general Vlastimir Djordjevic claimed that local population ‘didn’t take weapons because they liked it": they were forced to defend themselves. The accused denied that the Serbian MUP controlled the village units and that ‘those forces committed crimes against citizens of different ethnic background’ 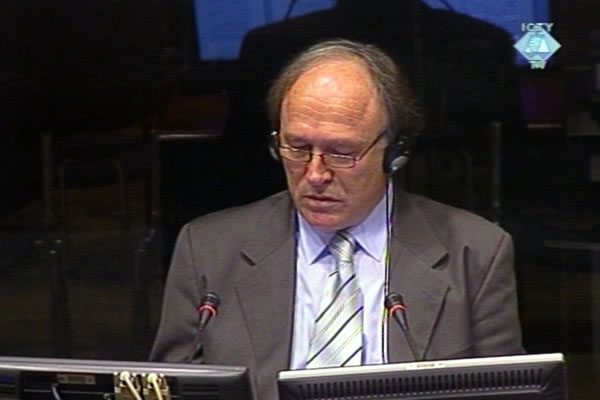 Vlastimir Đorđević svjedoči u svoju odbranu
The indictment against the former Serbian MUP Public Security Department chief alleges that the accused took part in the effort to arm and train the ‘local or village defense units’. Those units, as the indictment alleges, ‘operated under the command or jurisdiction of the VJ and/or Serbian MUP’. Vlastimir Djordjevic is charged with crimes perpetrated against Albanian civilians in Kosovo in 1999.

To prove this, the prosecutor today showed minutes from several meetings of the Joint Command of the army and the police in July 1998 where the participants talk about the distribution of weapons to the local Serbs. Djordjevic, who is testifying in his own defense, noted that those people ‘didn’t take weapons because they liked it": they were forced to defend themselves. Djordjevic also remarked that he never received any reports about the operation or engagement of those armed Serbs and the use of weapons issued to them by the MUP.

Djordjevic was then shown minutes from a meeting of the MUP Staff for Kosovo in November 1998. At the meeting, head of the MUP Staff Sreten Lukic demands that the police ‘make sure that Serbs are not misusing weapons, nor shooting at their patron saint’s day celebrations, weddings and funerals’, nor carry their weapons openly in the presence of the Kosovo Verification Mission staff. This, the prosecution contends, shows that the armed Serbs were under the MUP control. Djordjevic put forth a different explanation: the document shows that those who misused guns would be prosecuted.

The prosecutor then showed Djordjevic the minutes from the meeting of the VJ General Staff Collegium, where the VJ security chief Aleksandar Dimitrijevic expressed his concern that armed civilians might fall under the influence of radical elements and commit crimes against other ethnicities. The accused general said, ‘while I was in Kosovo nobody committed any crimes against citizens of another ethnic background’, adding that ‘everything is possible when General Dimitrijevic is sitting in his office thinking’. ‘It’s easy to sit and think’, the accused noted.

Djordjevic explained he was not aware that volunteers were recruited into the reserve police force as document drafted by the interior minister indicates. The accused argued that the minister ordered ‘possible use’ of volunteers and paramilitary units in the face of NATO campaign. As for Djordjevic, in his dispatch he merely ordered that those troops be kept under control.

The prosecutor then showed Djordjevic a report drafted by Sreten Lukic on 25 May 1998. The document says that members of the MUP and other groups are committing crimes against the ‘Siptar population in Kosovo’. Djordjevic said he ‘never received that information’.