GRAVES IN JURISDICTION OF POLICE

In his evidence in the defense of police general Vlastimir Djordjevic former chief of the VJ General Staff Branko Krga admitted that the military intelligence officers learned in the spring of 1999 that there were two mass graves near Prizren. Krga however claimed that it was the police and not the army that was responsible to undertake investigation. Are Russians friends of Serbs if Jews run their country? 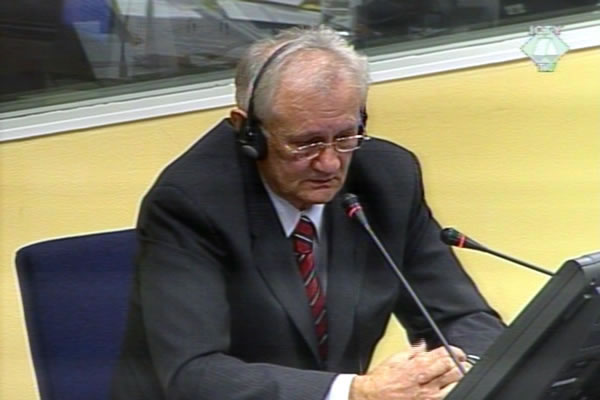 Branko Krga, defence witness of Vlastimir Djordjevic
Prosecutor Chester Stamp cross-examined former chief of the VJ General Staff Branko Krga. He noted that the VJ’s intelligence about the responsibility of NATO and the KLA for the expulsion of Albanians from Kosovo in 1999 was unreliable. At that time the witness was head of the Military Intelligence Department in the VJ. Krga was called to testify in The Hague by police general Djordjevic, on trial for his role in the joint criminal enterprise aimed at expelling the Albanian civilians from Kosovo during the NATO campaign.

The prosecution showed a military intelligence report from early March 1999. The report states that the KLA had a plan to attack innocent Albanian civilians and members of the OSCE Kosovo Verification Mission in order to blame the Serbian side for their deaths. Today Krga admitted that this had had never been implemented, adding that the ‘existence of a plan doesn’t mean it would be implemented’. The prosecution wanted to know if the army, since it had such reliable intelligence, told the OSCE about the purported intention of the KLA to attack the international observers. The witness said that the army did nothing.

Yesterday, Krga said that the military intelligence service learned in April 1999 from the foreign media that there were two mass graves near Prizren. This prompted the prosecution to ask what measures were taken in that regard. The witness washed his hands, saying that the army was not in charge of investigating such claims, allowing the possibility that the police was supposed to investigate: the witness for all intents and purposes shifted the blame on the accused for whom he had come to testify. The prosecution is trying to prove that Djordjevic, chief of the Serbian MUP Public Security Department, developed an interest in the Prizren mass graves and organized the exhumation of the mass graves and the transfer of the bodies to various locations in Serbia.

Prosecutor Stamp went on to read a part of Krga’s report delivered at the General Staff collegiums meeting on 2 February 1999, where he advises his colleagues not to get too carried away with the purported friendship with the Russians based on their shared Slavic ancestry and Orthodox religion. ‘The Jews rule Russia in collusion with the US’, Krga said. When asked if he had come to that conclusion based on the intelligence he had or his personal experience, Krga replied that he came to realize it during his three-year tenure in the diplomatic mission in Russia. Krga saw nothing controversial in his use of the phrase ‘Jewish rule’, stressing he was very tolerant of all ethnic communities. All that Krga wanted to point was that Serbia should be more realistic in its dealings with Russia.