WHO IS TO BLAME FOR THE ALBANIAN REFUGEES’ ORDEAL?

Former chief of the VJ General Staff Branko Krga says that the KLA and NATO created the ‘appearance of humanitarian disaster’ in Kosovo, adding that he knew the army was blamed for the ordeal of the civilians fleeing the province 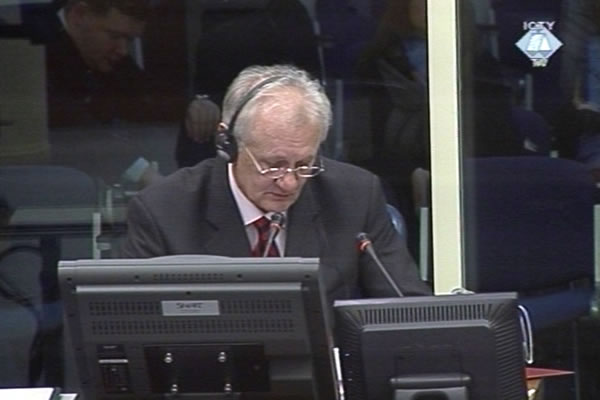 Branko Krga, defence witness of Vlastimir Djordjevic
Contesting the allegation in the indictment that the Serbian army and the police were responsible for the expulsion of Albanians from Kosovo in 1999, the defense of police general Vlastimir Djordjevic called former chief of VJ General Staff Branko Krga, who was appointed to this post in 2002. During the NATO campaign, Krga was head of Military Intelligence Department. At the beginning of the hearing, the transcript of Krga’s evidence at the trial of the Kosovo Six in 2007 and the statement he had given to General Dragoljub Ojdanic’s defense were admitted into evidence. Krga had testified at the Kosovo Six trial as Ojdanic’s defense witness.

In his second appearance before the Tribunal, Krga for the most part repeated what he had stated at the previous trial. The KLA and NATO, not the Serbian army and police, were responsible for the departure of Albanian civilians from Kosovo. Krga accused the Western countries and the USA of undermining the efforts of the Serbian side to reach a peaceful solution when they offered their support to ‘the Albanian terrorists’.

Defense counsel Aleksandar Popovic in his examination showed a series of minutes taken at the meetings of the General Staff collegium in 1999, attended by the witness, and a number of intelligence reports, drafted by the department he headed. Speaking at the collegium meetings, Krga always stressed that the KLA and NATO wanted to get the population to flee, in order to create the ‘appearance of a humanitarian disaster’ and justify the air strikes against the FRY. Krga provided his sources for this information: they came from the monitoring of the official reports from various international organizations and the foreign media, and, crucially, from intelligence officers abroad.

In his report delivered at the collegium meeting on 3 April 1999, Krga considered the way in which ‘the humanitarian disaster could be averted’, the defense counsel noted. Krga proposed the setting up of VJ checkpoints for refugees who wanted to return to Kosovo. ‘We knew that we were blamed for the ordeal of the Albanian civilians and therefore we did everything to make them return to their homes’, concluded Krga.

The witness tried to justify the presence of a large number of VJ troops in Kosovo in 1999, saying that before and during the air strikes there was a constant threat of a NATO ground attack from Macedonia and Albania.

The examination-in chief of the former chief of the VJ General Staff was scheduled to last two hours, but it was not completed after four hours in court. Since this was not the first time the deadlines were stretched, Judge Parker warned the defense that he would not tolerate it in future. Defense counsel Popovic explained that the defense decided not to call some of the witnesses on its witness list, and has to deal with some topics in greater detail because of that.