Police general Vlastimir Djordjevic says that he is ‘willing to accept responsibility for an ill-judged act’: his failure to do anything when he suspected that interior minister Vlajko Stojiljkovic had taken part in an operation to hide the remains of Kosovo Albanians 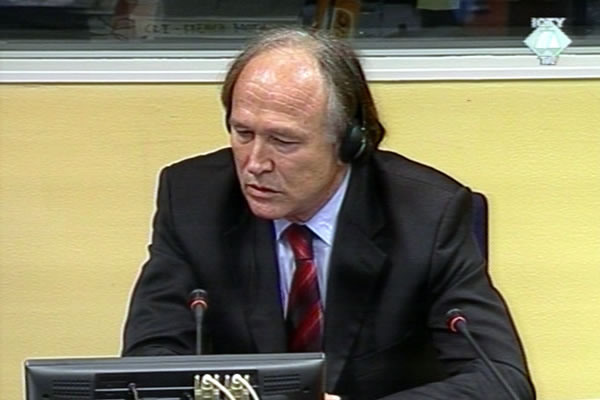 Vlastimir Đorđević svjedoči u svoju odbranu
Former chief of the Serbian MUP Public Security Department Vlastimir Djordjevic admitted in his cross-examination that ‘at a time when so many people were killed in Serbia, I failed to do anything’ about his suspicions that interior minister Vlajko Stojiljkovic had taken part in crimes. ‘I am willing to accept responsibility for this ill-judged act, I’m right here, Djordjevic said.

The accused police general contended in his examination-in chief that he had told the interior minister about the incident in which the Bor SUP police discovered a refrigerated truck in the Danube river in April 1999, loaded with bodies of Albanian civilians from Kosovo. Some days later, other bodies surfaced in the Perucac lake near Uzice. Djordjevic proposed to the interior minister to form a commission which would investigate ‘how the bodies ended up there’ on those locations. Stojiljkovic told Djordjevic, ‘those incidents happened, something was to be done and he was behind that’.

Although he ‘assumed that Stojiljkovic had committed a crime, Djordjevic said he ‘didn’t act’ according to the procedure: he was supposed to ‘establish the responsibility of the minister and file a criminal report’. ‘I should have done that, I would probably have lost my head and everything would have been OK now’, the accused noted.

Djordjevic also maintained that Stojiljkovic ‘issued a serious threat’, telling him to be careful about the bodies of Kosovo Albanians buried at the training ground of the Special Anti-terrorist Unit in Batajnica near Belgrade. The interior minister allegedly warned Djordjevic that it was a ‘sensitive issue’. This, the accused claimed today, made him ‘fear for his life’. Djordjevic said that he could ‘either have kept quiet or faced physical harm’.

In his replies to the prosecutor, Djordjevic admitted that burying bodies in mass graves and near the Perucac lake on the orders of minister Stojiljkovic ‘wasn’t in line with rules’. The indictment alleges that Stojiljkovic and Djordjevic ‘played a leading role in planning, instigating, ordering and implementing the program to cover up the murder’ perpetrated by the Serbian police.

The prosecutor put it to Djordjevic that the interior minister had tried to hide ‘trucks full of bodies’ of Kosovo Albanians because they had been victims of police crimes. Djordjevic denied it. ‘Those persons didn’t lose their lives in a normal way’, he said, but he couldn’t ‘hypothesize’ how that happened. Only when the prosecution insisted did Djordjevic say that they ‘may have been killed by the police, maybe they killed each other, maybe they were killed by the air strikes’’. Djordjevic contended he ‘couldn’t know the cause for sure’.